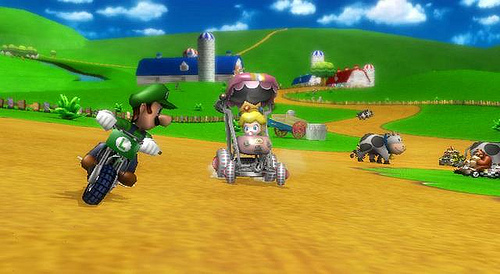 Sometimes you find co-op play in places you never expected to look.  In our latest Co-Op Couples segment we take a look at how a competitive game like Mario Kart for the Wii can be turned into a cooperative experience.

1. Family portraits with the baby: check.

“What? I thought you liked this one!”

“Yeah, but I’m more in the mood for Mario Kart Wii.”

Now, don’t get me wrong; I don’t mind a little competition. In fact, we find that an evening of Wii Sports boxing can be a dose of healthy fun. The trouble with some competitive games, though, is that if the player skill is not balanced, it quickly becomes a sour situation that hurts your chances of having a flesh-and-blood player join you the next time you offer to fire up your console of choice.

Ten years ago, the only way to play online was via PC games. Granted, that seemed to be the heyday for PC gaming, but consoles were also on the rise. Many, many sessions of 007: Goldeneye were played in my parents’ basement, thanks to a compliment of four boys (consequently, many Nintendo 64 controllers were maimed and replaced…good times). However, one of the brothers excelled above the rest, and rather than bask in sweet victory, the rest did what any prideful and self-respecting teenager or child would do: they quit altogether. So what was once the ultimate summer pastime was now a lonely single-player experience.

Naturally, the arrival of online gaming for consoles was a boon for me, and I jumped in feet-first. At the time, an original PlayStation 2 graced my bachelor pad, and finally I would be able to play games with other people! Unfortunately, competitive gaming dominated the scene for the most part; Syphon Filter: The Omega Strain was a shining beacon of incredible co-op play and customization, and was overlooked for titles like SOCOM II and Need for Speed Underground.

Sounds frustrating, no? But there was a saving grace…the year previously, a friend had called and dropped a hefty suggestion to a broke college student: let’s buy SOCOM: U.S. Navy SEALs, and start a gaming clan. Sixty precious dollars later, I was playing a competitive shooter…cooperatively.

We’ve all been there; you log into a highly competitive game to find that one person whose agenda seems forged by your brain. Several rounds or races later, you realize that your incredible win streak would have been impossible had it not been for the vibe that you’d shared. You’ve just ganged up on unsuspecting players from around the world…and it felt great!

Of course, this doesn’t happen often enough in shooters, and although the possibility is there, it is by no means guaranteed when joining random servers. Racing fans fare a bit better, but it can be a jungle out there, too.

However…keeping this in mind, we have the power to adjust our environment enough to create a “team mentality”, and ultimately work together to find a common goal. And thus, while browsing the Mario Kart Wii main menu, it occurred to me that by choosing the Team racing mode, my wife and I could play together as two members of Blue Team.

This scenario can be applied to quite a few games that don’t explicitly include co-op as a function of the game. Wii Sports tennis allows two people to play doubles against the AI, Halo 3 Rocket Races are a great way to play cooperatively against other co-op teams, Star Wars Battlefront II, Red Faction 2, Unreal Tournament III, and the upcoming Gears of War 2 are just a few examples of games with AI ‘bots included in matches, allowing you to set up a multiplayer game with your friends on one team and the AI on another. Most real-time strategy games allow multiple players to join forces against the computer or against other players and teams.

Mario Kart Wii was my wife’s game of choice in this particular instance, and soon after booting up the little white console, we found ourselves running picks for each other, blocking Read Team drivers, and being careful about where we aim our green Koopa shells. I have to admit: I’d rather let my wife go for the gold while I ran interference, because it brings a whole new level of gameplay to the experience. Once we made our way through one circuit, we popped online for a multi-national race, to which we employed the same tactics; and I have to say that without my wife running people off of the track, I would have never gotten second place.

Obviously, AI ‘bots and player alliances are not necessarily the intended way to play the game. However, many developers are aware of player interaction and gameplay improvisation, and as co-op fans, we can take advantage of this to find more ways to take our significant other to our side in the struggle against Bowser and his dastardly Red Team.

Co-op gaming is a state of mind…not just a tag on the back cover of a game package.