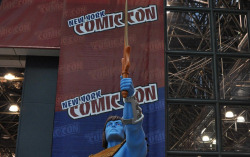 Our first NY Comic-Con has come and gone - and I gotta say I'm pretty impressed with the show.  The three day event took place at the Javitz Center in NYC and featured games, celebrities, comics, costumes, and fun!

We've been bringing you coverage over the past couple of days, so here's the round-up of what you may or may not have missed.

We took a ton of pictures of all the games, the booths, the babes, and the cos players for you to check out.  We even got some shots of those oh so sexy statues.

We checked out Prototype, X-Men Origins: Wolverine and Wolfenstein at an exclusive pre-Comic Con event for Activision.

We go hands on with EA's next Battlefield game.  A sequel to the original 1942 this game is download only with 3 maps and 24 players.  The game's producer Gordon VanDyke answers all the questions we ask.

Bioware's next epic RPG is a spiritual successor to their classic game Baldur's Gate.  We go hands on with the title and talk with Community Manager Jay Watamaniuk.  Not only that, we get the skinny on the console versions of this game!

We take to the not so friendly skies in H.A.W.X. from Ubisoft.  This game seriously impressed us with its four player drop-in/drop-out support and action packed flying.  This could be the first co-op hit of the year.

Could Ghostbusters be getting a true cooperative mode?  That's the impression we got after talking with members of the team.  The good news is it's already there in the Wii version in the form of 2 player split screen.

Everybody loves kung-fu fighting, so there's no surprise that Invincible Tiger: The Legend of Han Tao impressed us with it's slick visual style and silky smooth animations.

House of the Dead: Overkill Impressions

The only good zombie is a dead zombie...well that and a zombie that gives hugs.  We look at Sega's upcoming co-op zombie shooter for the Wii.  No light gun required.

One of these was a disappointment, the other was a surprise.  Can you guess which is what?  I'll be damned if you do.

And that's about it.  I'm already looking forward to next year!