It's June already, and that means the sun is shining, the weather is warmer, and it's time for another Xbox Live Co-Op Game Night!

This month's night will take place on June 19th and the featured game will be Grand Theft Auto IV.  We've covered GTA IV quite a bit in the past few weeks with both a review and some impressions, and now there's a full fledged night dedicated to Rockstar's big game. 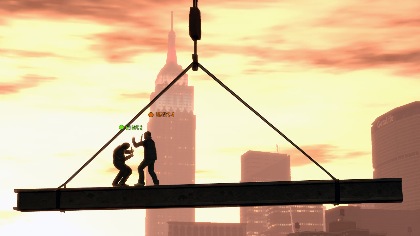 The Co-Op Experience: The game offers a few cooperative options. It should be noted that playing through the single player story is not available in co-op play.

Hangman's Noose
You and your 1-3 friends must take down the cops guarding a crime boss, Kenny, who's on a grounded plane at the airport. There's a few options here to tweak the mission and make it dynamic. There's also some cut scenes and dialog to go along with it.

BOMB DA BASE II
Description: A rival export business has a ship sitting in the docks waiting to be loaded. You must steal the explosives gain access to the ship and plant two bombs, one on the bridge, the other in the hold. Make sure you're not on the ship when she blows. Those are Mr. Petrovic's orders.

Deal Breaker
A co-op mission that requires players to assault a construction site captured by enemies, then chase a group of enemies before they escape.

The game also features a free roam mode in co-op which basically lets you do whatever you want, even though there's no mission structure. Think of it as one giant playground of destruction.

To access these co-op modes bring up your cell phone (up on the D-Pad) and select Multiplayer and choose one of the above mission names.

To join in on the action send a friend request to co optimus and utilize the Friends of Friends feature on Xbox Live to find other co-op gamers!

On top of all of this we'll be giving out some cool prizes to people that join up including Xbox Games and MS Points! We look forward to seeing you Thursday, June 19th on XBox Live!

Be sure to support Co-Optimus and purchase GTA IV through Amazon via the Links below!