As we enter September and look on the horizon for the fall there seems to be quite a few big name co-op games coming out for the Xbox 360.  Whether it's Gears of War 2, Fable 2, or Left 4 Dead - there are plenty of big name titles to fill that co-op void.  There's another title that kicks off the season though, one with a broader appeal.  Rock Band 2 is the sequel to the wildly successfull game without the 2 after it, and the Xbox 360 will get the new version earlier than the rest of the consoles on September 14th.

What does that mean for you?  Co-Op night on September 18th!

The Co-Op Experience:; The game allows up to four players to simulate playing together in a band in traditional music game fashion.  Lead guitar, Bass, Drums and Vocals are all available to play through a variety of classic, popular and modern rock songs.

The current set list for the game adds 85 songs to your library.  It includes artists like Nirvana, Elvis Costello, Jimmy Eat World, and many many more.    You can find the full set list right here and in picture form here.

The "what's new" in Rock Band 2 is an online World Tour Mode.  In this mode you can form an online band, play different venues, and progressively unlock more arenas to play, costumes to wear, and songs to play.  All with four of your friends over Xbox Live.

So how do you join in on the action?  Simple - just use the built in match making features of Xbox Live to find folks to play with in the Co-Op mode!  Alternatively you can send a friend request to co optimus and use the friends of friends feature to find other members to play!

You can pre-order the disc version of Rock Band 2 now at Amazon and support Co-Optimus.com!

Update:  We've just been given some super sweet T-Shirts and Stickers to giveaway!  All the more reason to join in on co-op night and be randomly selected for some sweet swag! 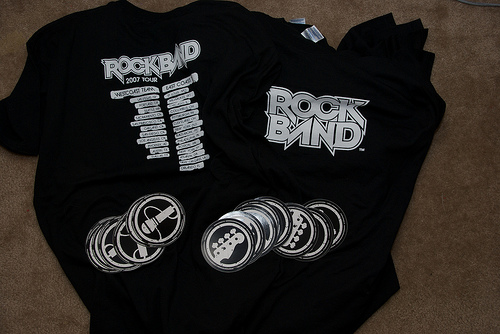