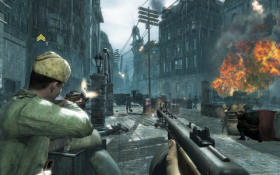 Hands on Impressions by:  James A. Young

If you've already checked out my multiplayer hands-on preview over at Colony of Gamers, then you'll know that I have very high hopes for the retail release. And this despite Treyarch being at the helm. If, on the other hand you missed it, let me assure you that Treyarch listened to the criticisms levied at Call of Duty 3 and have clearly worked their collective socks off to make sure the same mistakes are not repeated with World at War.

I began my co-op excursion in four-player mode. After one failed start, it was time to get cracking. One of the first things you may notice is the atmosphere, of which the audio plays a big part. It's a cliché, but it's almost like you're there with your buddies. Speaking of buddies – it's not just you and your three pals. The four of you form just part of a much larger team. While odd at first, the more you play the more the reasons for this inclusion begin to make sense.

It wasn't long before my team encountered our first taste of action. One word that I kept muttering to myself in the midst of firefight was “intense”. Again, the sound plays a big part in this – you'll hear bullets whizzing by or thudding in the ground near you, there's the oppressive sound of artillery shells landing all around you, then there's the sound of your AI teammates screaming directions or just simply screaming in pain. As I said – intense.

A good strategy I discovered while playing (and having died several times) is to not rush into confrontations like an amped-up John Rambo. Instead, it pays to be more methodical and take the time to find out just where the fire is coming from. It makes for a fairly tense experience. For example, myself and my human teammates decided to take things a little slower and approached the battle line cautiously. Suddenly, a single shot rang out and I heard it land just behind me. I had no idea where the shot came from, but one of my teammates pinned the location down and asked if I wanted take the shooter out myself or let him do it. I let him do it, and I watched as he did so rather expertly. One down, scores more to go. The sense of camaraderie and achievement in that one moment sealed the deal for me. Obviously you won't be able to literally high-five your buddies when you play online, but I guarantee you'll want to, and that's a feeling that's pretty rare these days in multiplayer. 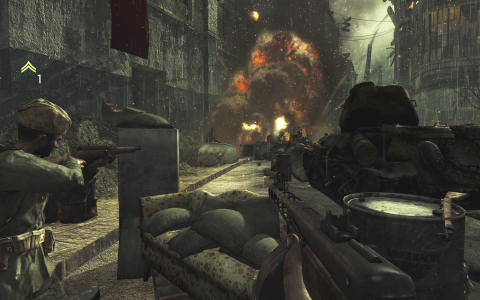 Getting shot in WaW co-op isn't necessarily the end. There's a finite amount to time you are afforded while you bleed out. You're completely vulnerable, of course, and so would any teammate be who risked life and limb to revive you. This again adds to the drama. Do you risk yourself to help revive an injured colleague, or do you let him/her bleed out, knowing that death creeps ever closer? You have to decide in a split second. I was revived a few times, but I was also left to die at other times. And vice versa.

Also worthy of note is the inclusion of vehicles. Handy for many reasons, such as getting from point A to point B in a hurry, or simply for the added protection, the vehicle handling and integration is really well done.

Sadly that's about all I can say on co-op as my time with that portion of the game was limited. However, I played enough of it to be able to say that I'm confident the finished version will be an immensely enjoyable experience.