When one first boots up Lord of the Rings: Conquest, they are greeted with a lovely animation of the Pandemic Studios logo painted on a fortress being pelted with arrows.  I cannot think of a better way to describe the campaign mode, but that’s getting ahead of myself.  LoTR:C is the latest from Pandemic Studios, creators of Star Wars: Battlefront, and they have brought the gameplay from that series to the Lord of the Rings universe wholly intact.   Loosely following the events of the films (emphasis on films), the game spans two campaigns and a multitude of competitive multiplayer modes starring your favorite members of the Fellowship and Sauron’s band of miscreants.

The campaigns are fairly basic: select one of the four base classes (Archer/Mage/Warrior/Scout) and play a sort of Middle Earth reenactor as you help mirror the battles you know and love.  One starts to get a feel after the first few levels that you’re playing a Battlefield-esque game mashed up with just a dash of Dynasty Warriors.  You’ll capture control points, defend barricades and generally slaughter the populace of whatever your current enemy happens to be.  When critical moments of battle are reached, you are given the opportunity to take control of a hero character, chosen appropriately for who would have been in attendance of your particular battle.  Sorry kids, you can’t take down an Oliphaunt with Frodo. 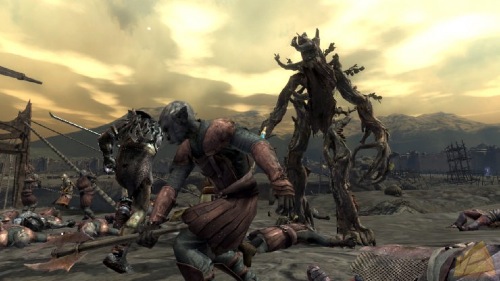 Unfortunately, there are a few annoyances that can really wreck your fun.  First off, melee classes are based around being able to knock down and juggle opponents.  This is fantastic to pull off as a player, but when five enemies surround, corner and juggle you to death or punt you off a cliff, it becomes less fun.  Another issue, which was thankfully toned down from our first preview, is the inhuman accuracy and persistence of enemy archers.  If you’re playing as a mage, you can toss up a protective shield and go on your merry way.  If you’re not?  Well, let’s just say you can expect to see your life get slowly ticked away by the multitude of arrows being slung your general direction.

The campaigns are absolutely best experienced in co-op.  Issues outlined above are almost completely negated when you have a buddy watching your back.  A corner-trapped player can be saved by a well-placed area-of-effect blast from a mage.  Life lost from being pelted by arrows from afar can be restored with a quick heal.  Being able to make your way through the campaign levels focusing on working as a team rather than being frustrated at the lack of help your AI buddies provide really turn the experience around.  Casting a fire wall spell to immolate twenty goblins at once while your partner climbs the back of a troll to deliver a fatal blow to its neck is pretty damn awesome.  There’s a sense of player empowerment that you don’t get out of playing solo.  The ability to switch character classes mid-level really helps you take on the objectives in a strategic manner, further reducing any frustrations mentioned in the previous paragraph.  The only real drawback to playing cooperatively is that it makes the game fairly easy.  I definitely recommend playing on a harder mode to help even out the challenge. 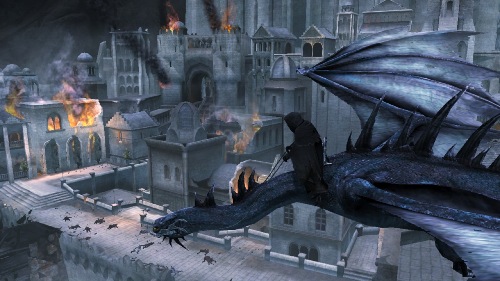 One of the biggest draws of this game is being able to play as the forces of Mordor, and I won’t ruin how that particular campaign plays out.  Trust me when I say if you’ve ever grown tired of Orlando Bloom’s straight-out-of Tiger Beat wholesome good looks, you’ll be very satisfied.

While the campaign mode may not be what some people expect, I did have a lot of fun with LoTR:C.  Pandemic really nailed the epic environments and large-scale conflicts, and it’s absurdly fun to control Legolas and take out an Oliphaunt, bringing it crashing down at your co-op partner’s knees.  However, as the game’s strengths are focused on the competitive multiplayer modes, players will definitely gravitate towards those.

The Co-Op Experience: UPDATE: As of March 2010, Lord of the Rings: Conquest can no longer be played in online co-op due to the servers being shut down. Conquest will let players take control of many of the characters and creatures from the series and pit them on any of the franchise's famous battlefields. From Cave-trolls to Oliphaunts to the Balrog and even Sauron, practically the entire universe will be available for battle with up to 150 characters on-screen at any one time. Up to eight players will be able to clash online, with four players able to play cooperatively through the main campaign either online or via four-player split-screen. And with two distinct campaigns to play through, including an original take on what would happen if Sauron regained control of the One Ring, Pandemic promises plenty of scenarios to wage battle through. [IGN]