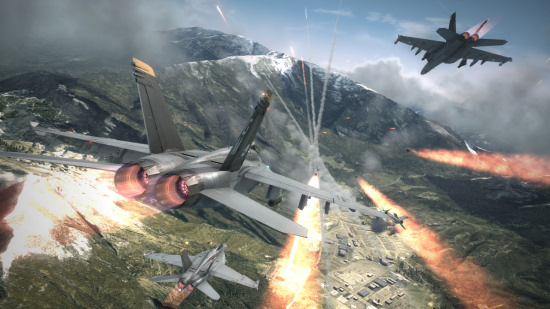 Thanks to my disappointment in previous iterations of co-op-less Ace Combat titles, my trepidation before purchasing Ace Combat 6: Fires of Liberation was to be expected. There was something about this game’s marketing that just couldn’t hold my attention long enough to warrant a purchase. Perhaps a demo in the Live Marketplace would have pushed me over the edge. Christmas 2008 saw Ace Combat 6 receive the Platinum Hits honor, which included a price drop to $29.99…and my excuses had run out.

Nick was inspired to dig his dust-covered copy out of the closet for a co-op mission, and at first we were dismayed to find the choices limited to four scenarios (two in the box, and two downloadable). Nonetheless, we fired up the first mission, and found that not only is this mode suited to four co-op players, but there is some strategy involved, as there are literally hundreds of target opportunities on all three: land, air, and sea.

We tried the mission three times. For the first play-through we flew as air superiority jets, and while we were able to cope with helicopters and enemy aces…the ground targets pretty much ate us alive. So we swapped to heavier, slower planes that featured an air-to-ground rocket barrage as the special weapon. Their forward machine guns also held a higher rate of fire, so SAAM stations and tanks had no chance of survival. We turned out to be a smorgasbord for enemy fighter jets, however.  The beeping of the missile lock became a ringing in my ears, with the only hope for escape to being a high-G turn.  Pulling both triggers will open the flaps and the afterburner simultaneously, allowing for this maneuver.  The controller configuration feels very natural to me: most of flight combat is flight, so it seems like a perfect fit for the triggers to be mapped as analog throttle controls.

After some failures, co-op strategy kicked in.   Nick chose to stay with the ground-attack plane, and I reverted back to the air superiority fighter.  I was able to take down jets and helicopters that were harassing Nick (he was my decoy), and Nick’s strafing runs with the rockets and heavier machine gun cleared away the SAAM turrets and missile boats that would have been extremely distracting to me as I curled clouds in aerial dogfights.

If you like this kind of combat, Ace Combat 6 is a steal at the current $30 price. Unfortunately, my sense of duty dictates that I rate this game harsher due to the limited co-op levels, but for hours upon hours of cooperative fun online, Ace Combat 6 is a game that many other games do not live up to. I’m hoping that next month’s H.A.W.X. builds on the premise of this game. 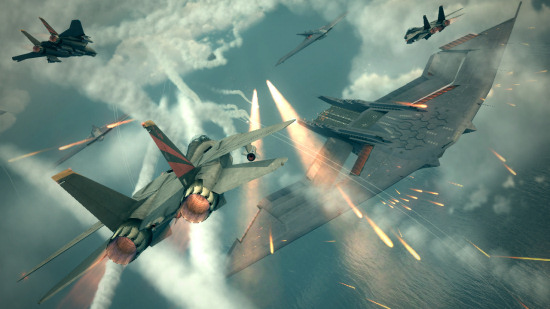 The great flying fortress of SHIELD...err..whatever.

For me the best thing about Ace Combat is it's light on the sim and heavy on the fun.  Sure the game provides options to make it more difficult with things like limited ammo - but that's not how I role.  In fact, during our second campaign the game throws giant  flying fortresses at you, not very realistic, but hella fun to take down.
Once we expanded our squadron to three players, it was easy to define roles.  One worked on the support craft, another took down the fighters, while the final ace of our trio worked on the big cruiser.
I was a little disappointed to find out the game only had four co-op missions to play, and none of those let me buzz the tower.  Each mission is time based, with 20 to 30 minutes available to complete.  Each death yields a respawn penalty ticking time down further.  So despite the fact there were only four missions, we only ended up completing...well zero missions.
I rather enjoyed the failure though, sitting to watch the post mission replays using the in game engine is a treat.  The game is absolutely gorgeous and these replays really show off the highlights.  It's pretty hard not to get into the game.
"Goose - bandit on your tail.  Hit your breaks and..."   I cackled  over the voice chat – which adds radio static when you talk.  "I know...watch him fly by Nick" said Jim reluctantly.  "Damnit Jim, I told you to call me Iceman!   ...can we go play DOA Volleyball next?"

The Co-Op Experience: We know you're not happy unless you're going Mach II with your hair on fire. Climb into the cockpits of the world's most impressive fighters and get ready to prove to the world you're the best of the best! Photo-realistic planes and combat zones drop you straight into the heat of the action as you scramble to defend your home. Command your allies in the air, on the ground, and in the water to help you hold the lines and press forward into enemy territory. Battle on up to six fronts at once as battles unfold in real time. Then, fly online as you compete against pilots from all over the world in massive, head-to-head dogfights!