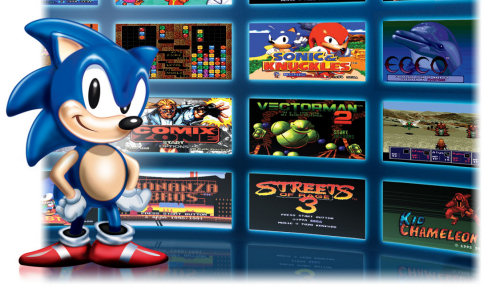 The Sega Genesis was the first gaming console I bought with my own money.  I can remember the day I walked downstairs and told my mom I wanted to go to the mall to buy the system.  It wasn't long after that I was in love - I was amazed at how many colors were on the screen with Sonic the Hedgehog, surely it couldn't get any better than 16-bit!  Almost twenty years later I can still relive those memories in Sonic's Ultimate Genesis Collection for the Xbox 360 and PlayStation 3.

The collection includes over forty classic Genesis titles with hits like Altered Beast, Sonic the Hedgehog, Ecco the Dolphin, and the Phantasy Star series.  All of these games are based on the original cartridge version of the game - and all of them feature the ability to render in hi-def.  Applying the latest filters and dabs of fairy dust breathes new life into these games on your big 52" LCD screen.  TVs have come a long way since a 24" TV was considered big - but if you are a purist these filters are optional and off by default.  Most games in the collection have specific achievements or trophies to unlock, as well as unlockable content on the disc.  Along with the forty available games from the start, there are nine other unlockable Sega arcade classics for play.  Viewing a game in the library shows the original manual and box art, as well as any developer interviews or video features Sega put on the disc. 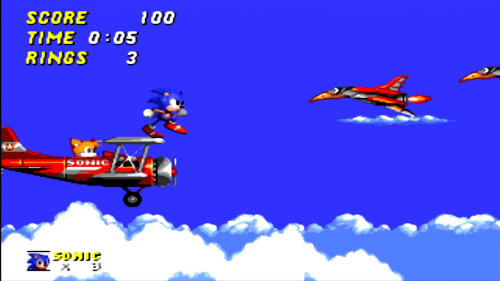 Yes this level is still a PITA

My fondest gaming memories involve the Sega Genesis and co-op games.  I'd rush home from school and hop on my bike to get to my friends house to play some of the greats.  The system was the definitive source for co-op beat em ups, and Sonic's Ultimate Genesis collection has some of the greats.  The entire Golden Axe series (1,2 and 3) is available with it's two player co-op mode.  Golden Axe II is a personal favorite of mine.  The Streets of Rage 1 through 3 is also on the disc, and it still retains the charm it had all those years ago.  You'll also find the Sonic games on the disc, with the games sporting Tails as a second helper playable in co-op.  The Sonic games hold up particularly well, and even seem to enthrall a new generation of gamer.

If there's one complaint I have about the collection, it's the lack of online play for these titles.  We've seen some of these re-released via Xbox Live Arcade and the PlayStation Network that feature full online co-op - sadly games like Streets of Rage 2 are missing this option.  That same buddy from school no longer lives down the street, but instead across the country.  It would have been nice to further relive some childhood memories. 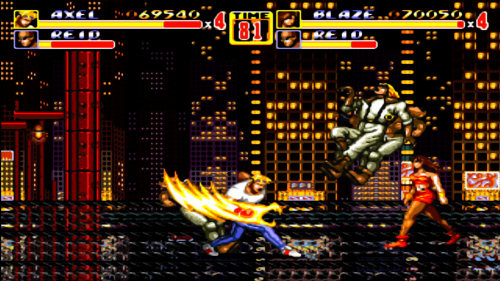 Watch what happens when Axel gets close to Blaze...

That being said the collection offers an incredible value at only $29.99.  You have a solid collection of some of the greatest co-op games ever created on one disc, combined with some truly great RPGs like Phantasy Star 2 and Shining Force.  And of course you have the collection's mascot Sonic and several of his titles.  In a day and age where we are charged $5 or even $10 for ONE of these titles on download services this pack is the absolute best value you can find.  No excuse me while I go listen to some MC Hammer, watch Saved by the Bell and beat Dr. Robotnik.