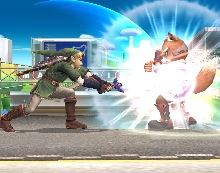 13934
Super Smash Brothers Brawl has something for everyone. For hardcore Nintendo fans, it has a cast of characters that would make fanboys swoon. For music buffs, Brawl features what could be easily considered one of the best soundtracks of all time, since the game features some of the better tracks from a boatload of Nintendo games (along with nice music from the world of Sonic and Solid Snake). For hardcore completionists, it has a massive vault of unlockable goodies. For the 80s teenager in all of us, there is a sticker mode, which is basically trophy mode only with much more variety. The game even has something for hermits who don’t like to play with anyone in real life: a robust bot system as well as a solid-if-basic online mode. However, this game was designed for one group of people: those who want to play with their friends.

It would be incredibly easy of me to say that Brawl is a great multiplayer and co-op experience merely because of the number of options available. However, like any other game, Brawl shouldn’t get a pass because it has a lot of content. After all, the grand debate has always been quality versus quantity. However, Brawl seems to have both, an extremely unusual (but nonetheless welcomed) occurrence.

Nowadays many games live or die based off their multiplayer content, and if this theory is true, Super Smash Brothers Brawl is living large with a mansion and a nice pension plan. Along with some much-welcomed refinement, Nintendo has also made some previously single-player only modes into co-op experiences. To be specific, Event Mode and Home Run Derby have been given the co-op treatment. Home Run Derby is essentially the same as it was in Melee aside from the addition of a shield that keeps you from knocking old Sandbag off (the shield deactivates with too much damage, or when the timer runs out). The new two-player Event Modes are welcomed, and thankfully, they are not exact clones of the single-player Event Modes. Also, Nintendo was nice enough to play off the “two players” theme by having some event modes feature two great villains or two great heroes teaming up in all their fanboy-pleasing glory. The rules are the same: eliminate your enemies before you run out of lives, but the addition of an extra player helps take away from some of the frustration that Event Mode often causes. 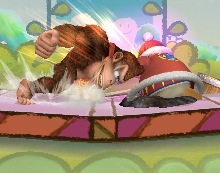 The biggest drawl for Super Smash Brother’s Brawl (like all the Super Smash Brothers before it) is it’s versus mode, which is called Brawl in the game. As per usual, up to four characters can duke it out in Super Smash Brother’s unique fighting/action hybrid gameplay. The game features over thirty characters in total (including unlockables) and has been honed, refined, and delicately tweaked so that it is the most solid Super Smash Brothers game ever. The addition of the Smash Ball (which, when broken open give the player a super-attack) causes mini-heart attacks whenever it shows up, and there’s really nothing like Mario vs. Sonic vs. Solid Snake.

The game is fun enough to play with your buddies, but my roommate (who has been steadfast beside me playing all of Brawl’s many modes) and I really enjoy teaming up against the computer for some two-on-two action. Part of this is due to the superb AI in Brawl. I always found Melee’s AI to be somewhat simplistic, and the “average” setting on the AI was my starting point. However, like seemingly everything else in the game, AI has been tweaked for Brawl, and now the AI is significantly better in both scale (in that level 4s can hold their own and level 9s can beat you silly) and ability, as the bots in Brawl do things that their Melee counterparts never/rarely did, such as use items, as well as use their shield.

The AI really functions well as an substitute for a real person, and after playing Brawl for a while, by roommate and I actually preferred the AI over real people, since (1) AIs do not throw controllers when they get beat, and (2) Teaming up against an AI gives you a sense of camaraderie that playing against other people really does not give you. Maybe it’s because you can berate the AI and it doesn’t get mad.

So, all things considered, Brawl has become one of my benchmarks for multiplayer and co-op excellence for two basic reasons: quality and quantity. Brawl mode is one of the most balanced and addictive multiplayer modes ever designed, and Subspace Emissary is a great (if flawed) addition and a fun little ten hour excursion for you and your buddy. Add in the quantity of other modes, like Home Run Derby, Event Mode, Classic Mode, not to mention trophy and sticker collecting, and so forth. Brawl packs a little bit for everyone in one compact game.

The Co-Op Experience: The co-op mode allows you to play through the story part of the game with a friend.The online co-op is more challenge based. More info can be found here