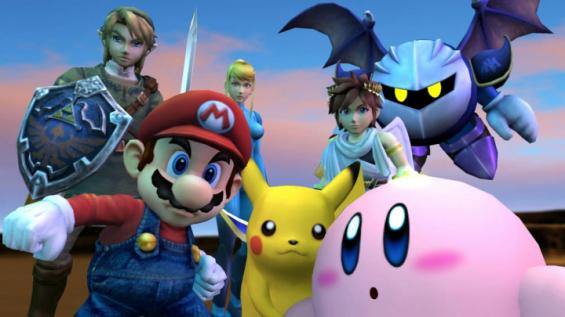 For me, every "This Week in Co-Op" game could be Super Smash Brothers. I really do play it every week, but let's face it, you don't want months of just "dude, Ike is tough." In fact, I never planned to have SSB: Brawl be my co-op game of the week for a long while. However, this week, I was hit with a realization like a ton of bricks. You see, I realized something about video games that is so true, yet I never realized it before. Video games can bring make people actually become friends and become close. And the game for me was Super Smash Brothers Brawl.

I have written about the fun times I had playing with my buddy, but I never thought anything more than just playing Super Smash Brothers. However, I realize now that Brawl was really a catalyst that led me and my roommate to get along very well. Now, if you are unaware, the roommate business in college is a sketchy business at best. I mean unless you know your roommate beforehand, you're essentially getting a grab bag. However, I got a good roommate, but I didn't know he was a big gamer like me.

So, last year, when I got Brawl, I asked my buddy to play some, since he was a SSB fan. We played it forever, until my eyes were redder than Pikachu's cheeks. We kept playing the game day after day, and whatnot, and we got closer over the year. Brawl didn't just make us instant buddies, but it lead us down a path towards some form of friendship. I.e. because of Brawl, we were able to find a common ground and be friends. Whether you find the story sappy or not, it is a true story.

So this leads me to now, when I consider my roommate to be my buddy. It was thanks to Brawl, because Brawl brought us together and gave us something in common. I mean, we watch our favorite shows together (we love The Office), get along well, and even share our stuff. I let him use the TV when he wants, and he shares his bottled water with me (a key to survival in a dorm that doesn't yet have a working water fountain). And it was thanks to Smash Brothers Brawl. Why? Because it is just a solid game.

My roommate and I only play on teams, and for good reason. No one gets hurt, and we can despise our enemies with no repercussions. Also, it's great for team building exercises, and nothing is more fun than beating up Lucas and Ness in the name of friendship. But in seriousness, this demonstrates how solid the game is. It's really fun, and can be hard or simple, depending on what you want. It also has a boatload of options and replayability. This enabled us to play the game for hours and hours, and in these hours we bonded.

This week's column is rather esoteric, I'll admit. But you could consider this column to be about the friend-building feature of all video games. I mean, substitute beating up Pokemon for jamming in Rock Band or beating up baddies in Castle Crashers. However, some games just resonate with us differently.I discovered that in Super Smash Brothers Brawl. Thanks to that, I can actually consider my roommate a friend.