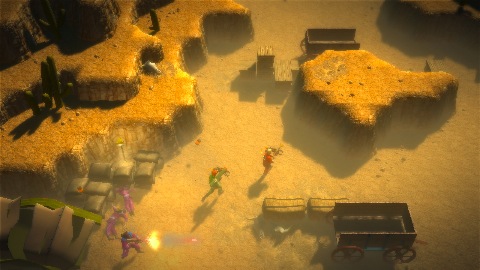 It seems that everything old is new these days. TV shows from the ‘80s are being made into bad movies. Old NES and Sega games are getting poor remakes, or awful sequels that noisily get filed away under “this didn’t happen.” In this world of bad remakes however, Bionic Commando: Rearmed serves as an ideal model of how to do it right. At least for the single player experience.

The original Bionic Commando for the NES was a breakthrough for action platformers. While the plot itself was nothing to get excited about (a poor translation didn’t help), it did do something no other platforming game to date had accomplished: it removed the ability to jump and in its place it provided the player with a mechanical claw that served as a kind of grappling device. Navigating through the 21 stages thus became a matter of using this “bionic” arm to grapple on to ledges and then swing across. Trust me, that simple action sounds far easier than it actually can be in practice, and Bionic Commando: Rearmed does an amazing job of leaving this core gameplay mechanic intact while making a few tweaks to produce an even better game.

Of course, as the “Rearmed” portion of the title implies, the game has had some updates made. This includes being able to change weapons at any point during a stage, getting weapon upgrades, picking up and throwing barrels or enemies with the bionic arm, and new bosses to face. Key among these updates is the addition of a new co-op mode. At long last players can now team up to take down the Badd guys, rescue Super Joe, and shoot a rocket at Hitl- err, “The Leader’s” head. Unfortunately, while Bionic Commando: Rearmed is a great game to play solo, the new co-operative mode doesn’t feel quite as well executed.

For me, one of the greatest drawbacks to the new co-op mode was the local only restriction for consoles. Being able to play with friends on-line would have made the co-op mode a whole lot more accessible as these days, our schedules don’t always make it easy to have them over to play. Despite this, Bionic Commando: Rearmed does overcome one of the greatest frustrations to many co-operative platformers: forcing both players to remain on the same screen. In Bionic Commando: Rearmed, if one player falls behind, then a split screen mode goes into effect (either a horizontal or vertical split depending on the situation) so that players aren’t tethered to one another. Not only does this make the experience less frustrating as a whole, it also gives players the freedom to split up and then team up on enemies and bosses. One cautionary note, though: when the screen split happens, be prepared to be a little disoriented. When I was playing the game with a friend I was grappling between ledges, got too far ahead of my friend, and the screen split. The sudden change caused me to miss the next ledge and die. Speaking of death, lives are not shared between players, so veteran players teaming up with a new comer don’t need to worry about their lives falling down the same pit over and over. Should a player die completely, he can just press the Start button to take a life from the other player and get right back into the action.

Overall, Bionic Commando: Rearmed is a great game and fans of the original will not be disappointed. The new graphics, music, and gameplay enhancements make it a better game than the original in many ways. The new co-op mode, while fun, often feels like it’s best suited for either new Bionic Commando players, or for veterans to team up with their friends that have never played before. Two players that have played the game before and are familiar with the ins and outs may feel like they’re in more of a competition than working together to beat the game.

The Co-Op Experience: Two players can work their way through the campaign together. The 2nd player is just a color-swapped version of the main character. The game features dynamic split-screen. As long as both characters are close enough it is a shared screen.