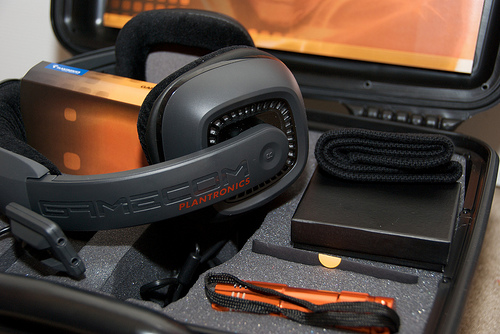 Co-Op gaming is all about communication, and in the day and age of high speed networks and premium online services it's all about voice communication.  The need for a good headphone and microphone combination for PC gamers is critical not only for cooperative gaming, but for team based gaming as well.  With so many headsets on the market it may be tough to decide where your money should go; thankfully Co-Optimus is here to help with our first hardware review.  Up first is the Gamecom 777 Headset from Plantronics.

The Gamecom 777 is a headphone/microphone premium headset.   They aren't the smallest on the block, but the weight is deceptive in relation to the size.  They are incredibly light, with nice fluffy ear pieces.  It's the kind of headset you can wear without your "ears getting tired."  It's an open ear design, which means you can hear the ambient sounds around you to some degree, some people prefer this, though I do not.  The headset has a built in mic, which sinks into the strap at the top becoming invisible.   There's a ridiculously long cable (I think 12') as well as inline volume control and mute.  All of this culminates into two standard 1/8" jack connectors for the mic and headset.  But the coolest part?  The small USB adapter that these plug into giving you true Dolby Headphone support.  Dolby Headphone is a brand new technology that simulate 5.1 surround sound in headphone products, it works incredibly well.   On both my Mac running OSX 10.5.4 and PC running Vista with SP1 there was 0 driver installation for the headset, you plugged it in and it just worked; what a novel idea. 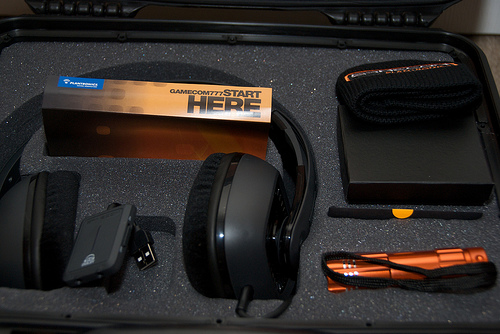 I used the headset both for gaming and for listening to and recording a podcast.  Gaming wise everything sounded great, there was plenty of definition in the sound without everything coming across as tinny.  Bass was adequate, but not over powering.   While I didn't use the built in mic to actually record the podcast, I did do some testing with my co-host and he said the quality sounded a little better than a telephone.  That quality level is more than adequate for gaming.

With a $99 price tag, the Gamecom 777 isn't a light investment, but quality doesn't come cheap either.  The headset is well constructed, offer a lot of features, and are comfortable to use for long sessions.  Co-Op gamers (ok any gamer) that are in the market for a headset and mic that will last you a while, definitely take this into consideration.

Update (7/10/2010) - Plantronics has released an updated version of the headset with support for Dolby Digital 7.1 surround sound.  After using the latest version, which is nearly identical to the previous build, I can say that the sound quality is even further improved.  The biggest difference is the spatial sense the headset provide when using the included USB adapter.

Note - The items pictured in this review are different than the retail packaging.  The headset however, remains the same.