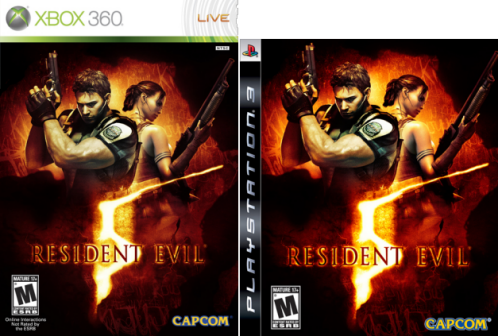 The following post contains a ton of information about the upcoming co-op survival horror game, Resident Evil 5.  Reading any further may induce drooling and extreme jealousy.  You've been warned.

At that moment, the game felt a little like Left 4 Dead – there were too many zombies, my partner needed to be rescued, and for a while there weren’t enough bullets to kill them all. I was teetering at the edge of zombie-induced anxiety, but before I could take the plunge into “Oh em gee, this is scary,” all the enemies were killed and Randy and I were at full health. And a bunch of handgun ammo spawned in where the dead zombie bodies had evaporated.

But all isn't good, according to Kotaku the PS3 version of the demo looked "considerably worse" than the 360 version, but all hope is not lost... Once they got their hands on the new levels, after a few mishaps, both versions of the game seemed to balance out.  The sly ninjas even managed to sneak a peak at a cut scene they weren't suppose to see as well as a flame thrower!  After being wrangled back in, the demo proceded.  The whole event was designed around co-op play, and from what we can tell, it almost requires it.

This is where we saw our first boss fight with some kind of monster that fell off a truck. The demo guy said he wasn’t allowed to tell us what the thing was called – but “zombie bat caterpillar thing” just about sums it up. This boss fight was all about quicktime events (boo!) and making use of Sheva to get behind the zombie bat caterpillar. There was also minor babysitting of Sheva involved whenever she’d fall off a cliff and need pulling up.

I imagine this would have gone more smoothly had a real person been playing Sheva instead of the AI. The entire game can be co-oped, so you might want to take advantage of that if you get a particularly lousy boss fight where you don’t have the time/energy to babysit.

Overall the impressions of the game seem fair, but fans of the series might be set up for a disappointment as the game is more akin to an action game now rather than a survival horror game.  Be sure to read both articles over at Kotaku.

Also released yesterday were the final box arts for the game, and while they are nothing special, it's their description that adds a certain twinkle to Chris Redfield's eye.

"The new box art imagery gives players a sneak peak into the nightmarish world of Resident Evil 5 as the art shows off the most thrilling new features in the game including the action-packed new 2-player co-op, the setting of Kijuju where light and darkness bring new horror and mysterious scribbling that represent a fear that no fan will forget….

This art will dominate North American store shelves when the game launches on Friday, March 13th, 2009."

Finally we've posted a handful of new screenshots that once again focus on the co-op play.