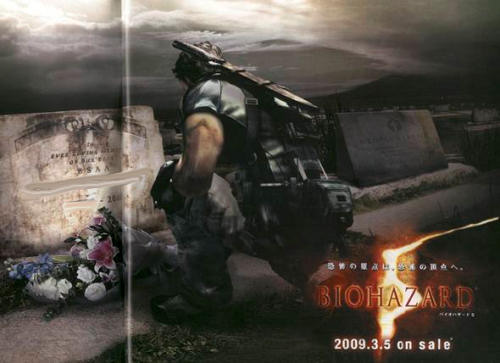 The upcoming Resident Evil game looks to have a prominent character in the series kick the bucket.  Japanese gaming magazine Famitsu has run an ad for Resident Evil 5, call Biohazard in Japan, featuring the details.  We aren't going to spoil it for you, but the above picture features the character's name.  Of course, this could just be a cruel trick on Capcom's part, or perhaps it's somehow integrated into the story.  Maybe the goal of the game is to use the Umbrella virus to bring this charcter back to life?

We won't know until we get our hands on the two player co-op Resident Evil 5 next March.  Until then, if you are curious click the read more link to see whose name it is on the tombstone.

Roll Over the Image to Unveil the Tombstone