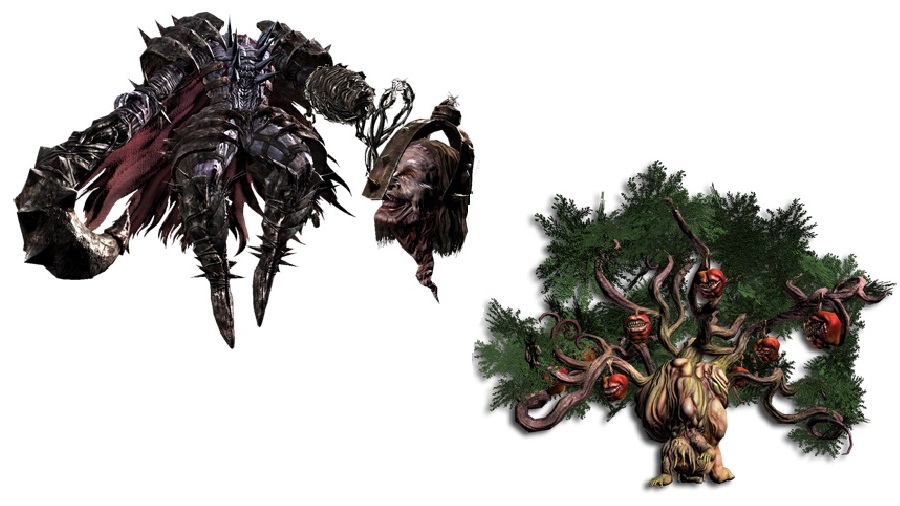 Free DLC is kind of like sex; even when it's bad, it's good. The new Soul Sacrifice DLC isn't bad. It's just brief. So the sex analogy still applies. The "Headless Knight and Starved Citizenry" pack features two new bosses, eight new missions (sort of), SNS (That's social network support. I had to look it up. I'm old. I admit it.) and a few other minor, but useful updates. There's also a new Black Rite, "Berserker," which can be downloaded separately. It's also free.

First of all, if you're a fan of the game and have somehow not  downloaded this content, do so now. There are two new Archfiends to farm for some sweet new sigils and essences, as well as new boss spells. If you're not a fan and you have no idea what I'm talking about, skip this post. There's nothing for you here. Maybe I'll make a penis joke for you later. Probably not.

Let's get the fluff out of the way. The SNS allows you to annoy your friends with Tweets and Facebook posts concerning your Avalonian accomplishments. You can post your arm status or your save/sacrifice stats to your accounts. I posted my Divine Arm IV to Twitter and received 90 Lacrima. It also added a link to the PlayStation Store page for Soul Sacrifice, so you're Tweeting a commercial. Thankfully it will only let you do this once a day. I don't know if this is what the creators of AR tech had in mind, but I'm doing it.

The update also added AR support. If you toss one of the AR cards that came with your Vita on a table or similar surface you can summon a tiny version of your sorcerer and collect some more Lacrima. I received 10 drops for my efforts (20 on my second go). This is really just a drop in the bucket of salty book sweat most players have collected by now.

Three new in-game features will come in handy for newbies. A compass has been added, which is kind of weird, considering the size of the levels. There are only four or five stages that aren't simple arenas, and it's very hard to lose your way. If your co-op partners are already getting lost, shouting "North" or "South" at them isn't going to help. I guess it's the thought that counts?

You can also collect Lacrima while in an online lobby now. This is very convenient for co-op players who don't want to drop out to simply recharge their Black Rites or broken offerings. My favorite new addition is the list of collected essences at the end of a pact. Now you don't have to double check your sigils between battles. No, you still didn't get the Wyvren SE double plus. It's never going to drop for you. Never.

What you're really getting with this DLC are more pages in the Librom. The new Archfiends, Dullahan and Behemoth, each receive their own twisted entries in the lore section. As with the other Archfiends, you can learn their back stories and get nice and friendly with the people they once were. Then you can access their monstrous forms through the Forgotten Pacts and kill them -or save them. It's your choice. The new Hour of Amber has six battle pacts and two discovery pacts -and we all know foggy discovery pacts don't really count, so it's more like six new missions, not eight. The pacts range from five to 10 stars in difficulty, and an old, familiar Archfiend finally gets a proper high level pact. The new missions are appropriate for mid to high level players, but if you're doing speed runs on Leviathan you won't find much of a challenge here. Still, they're fun, and both Archfiends seem to be original monsters, not simple retreads like the Cyclops/Minotaur or Kraken/Hydra. If you're into the whole cooperative/farming/grinding experience of Soul Sacrifice, it's worth the time to download (or unlock on the cart, if you have the physical copy). I should note that even though these pacts appear in the Forgotten Pacts section, they lack the completion requirements of similar missions. That means there's no time limit or unscathed restrictions. So once again, it may be a little easy for super badass players. But hell, it's free.

And don't forget to pick up the Berserker Black Rite. It temporarily turns you into a purple-headed monster. Did you think I was kidding?

Soul Sacrifice supports four player online or local co-op. It's out now exclusively on the PlayStation Vita. The "Headless Knight and Starved Citizenry" DLC is the first of several free and paid DLCs scheduled to launch over the next several weeks. You can download it through the PlayStation Store. We'll keep you posted.