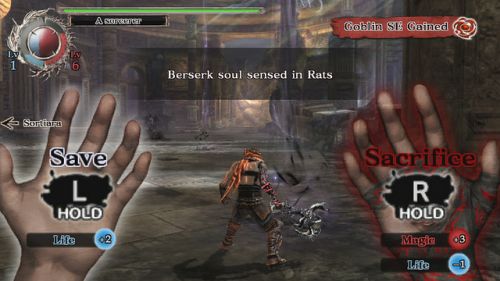 Soul Sacrifice finally has an official release date. The four player cooperative game will be available in retailers and downloadable through the PlayStation Network on April 30th. Set in a dark fantasy world, players must sacrifice objects to harness magical spells. The more valuable the item, the more powerful the magic.  "Swordmaster's Seedlings" and "Giant's Bones" are good for basic combat, but what happens when you are faced with a truly  daunting enemy? Maybe you'll have to sacrifice one of your own limbs, or another player -- maybe even yourself.

Such is the rather wretched-sounding world of Soul Sacrifice. I don't know about you, but I think I'd rather become proficient with a good old fashioned axe and shield combo as opposed to pulling my own spine out of my face to form a magical sword of gorey might. But hey, that's me. If you are into the whole self-mutilation for-personal-glory thing, that's cool. There are some handy pre-order bonuses you should know about after the break. Those of you who pre-order Soul Sacrifice will receive those fancy duds you see in the image above. The game is supposed to feature heavy customization, and extra outfits are always nice, however impractical they seen.

You'll also receive three magical items that will hopefully prolong the cutting off of your own fingers:

Spirits’ Fulgurwood – Root provided by the Thunder spirits. Tracks enemies on the ground and attacks with thunder spell

Okay, so pre-orders will receive some sexy new outfits (did you catch dude's red cape?) and some sweet fire-spearing, explosive-stoning, thunder-rooting magical items. What else? What's this? The Japanese voice-overs are included as a pre-order bonus? Does that mean Sony is going to charge you for them if you don't pre-order? Yes. It does. Neat bonus, I guess?

Soul Sacrifice will support four player local or online co-op. It is exclusive to the PlayStation Vita, and will be available via download and to physically buy in stores on April 30th.