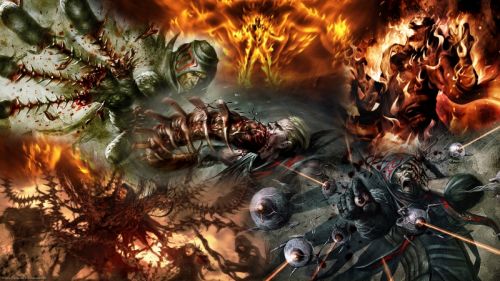 I was pretty stoked to hear that Soul Sacrifice would be coming stateside. The four player co-op Vita title focuses on sorcerers who physically torment themselves, sometimes to the point of death, to learn more powerful magic. Gruesome. I was disappointed that the game wasn't playable at this year's E3. At least there was a pretty sweet trailer:

Man, it looks like Demon's Souls and Hellraiser had a baby. As much gory fun as that trailer is, it fails to show much gameplay. Lucky for us, the KineticElements Youtube channel made an montage using footage of the Soul Sacrifice announcement event last month. It features the four and a half minute battle against the giant Cerberus. The viewpoint continually shifts between the four co-op players, demonstrating several different spells. Warning: The translated commentary from the event has been replace with some really cheesy music. Seriously. Mute it and enjoy.

If you want to see the video with developer commentary from Keiji Inafune you should check out the full press conference here.