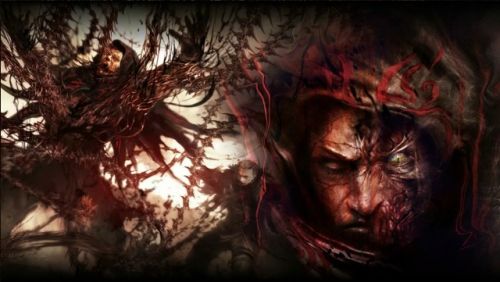 Soul Sacrifice is an upcoming dark fantasy adventure which has renewed my interest in the PlayStation Vita. This four player co-op title's core concept focuses on sorcerers gruesomely sacrificing themselves (and each other) in order to discover and wield violent spells.

Conceptualized by iconic game designer Keiji Inafune, the world of Soul Sacrifice is populated by grotesque creatures who were once human. The desire to use powerful magic has twisted their physical bodies into hideous monstrosities. A similar fate may befall the players. Offering a wide variety of customization options, characters will change appearance to coincide with different playstyles. Soul Sacrifice was revealed at a press event earlier this month. Sony was kind enough to record the presentation for science. The following three videos cover the introduction of the game and its concepts, the music behind the title, and finally a six minute clip of vicious in-game footage featuring four player co-op. All three videos include ample concept art, most of which you can find in the gallery at the bottom of this page.

The first video features Inafune introducing the game. After a theatrical intro there's a little bit of business before pleasure. Inafune comes on stage at the 4:30 mark. He presents Soul Sacrifice as a "fighting shoulder to shoulder" title, as opposed to a cooperative game. He also discusses the overall theme of sacrifice and how it impacts the gameplay. The whole press conference has been dubbed in English and is pretty interesting, if you're into that sort of thing. If you're more a visual learner and not that interested in presentations, the "Excalibur Spell" trailer should not be missed. It begins at 6:40. After the Exaclibur trailer Inafune goes on to cover characters, monsters, and the consequences of player's sacrifices.

The next video covers the music which is going into the game. This is not my area of expertise. If you'er an audiophile who is interested in composing music for games, this video's for you.

The final video features in-game footage of a four player co-op session. Players confront a giant Cerebus with an assortment of spells. You'll notice that characters can arm themselves with magical melee weapons, so brawlers can still enjoy the game. Things get real interesting around the six-minute mark, as a player is faced with the choice of saving a fallen ally or sacrificing them for the cause.

Soul Sacrifice is expected to launch this winter in Japan. It has not been announced for stateside release, yet. Siliconera reports that Sony has registered a domain name called "ForsakenSoulstheGame.com." Might this be a localization of Soul Sacrifice? Maybe. I honestly don't know why they would change the title. There has also been speculation that this game is somehow connected to Demon's Souls, but given the gameplay footage, this seems highly unlikely. Still, fans of the dark fantasy genre have something to look forward to this winter.