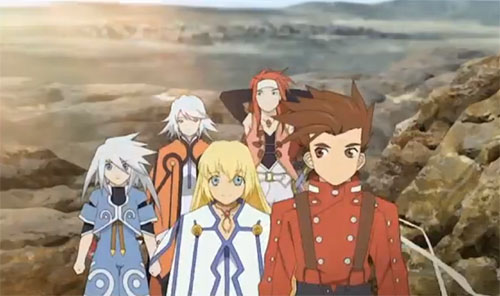 There are a ton of Tales games out there. They are a staple for many JRPG fans who want some co-op in their JRPGs and one of the most popular and most celebrated Tales games is certainly Tales of Symphonia. To celebrate its 10th anniversary, Namco Bandai has announced that this classic JRPG will be remastered in HD and bundled with its Wii sequel Tales of Symphonia: Dawn of the New World for the PS3. As to additions and changes to the original games, details are currently slim, but new cut-ins for Artes are promised as are additional character costumes from Tales of the Abyss.

The two-game bundle will be released in Japan on October 10th under the name Tales of Symphonia: Unisonant Pack. It will also be released early 2014 in the West as Tales of Symphonia Chronicles. A limited edition of the bundle is planned for Japan (including 5 figurines and an original novel), but no word yet on special editions for outside of Japan. Check out the trailer below (sorry, it's in Japanese!):

Tales of Symphonia and Tales of Symphonia: Dawn of the New World both support up to 4-player local co-op where each player takes control of a character in the combat parts of the game. It seems extremely likely the the PS3 HD remasters will feature the exact same type of co-op.