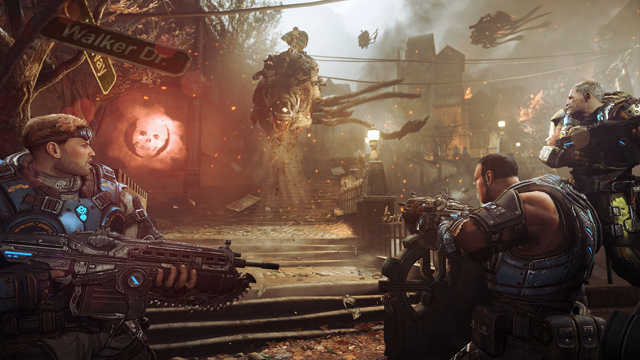 Hold onto your butts, folks! We’ve got the latest on Gears of War: Judgment’s most recent update, hopefully to fix those annoying bugs and sharpen the gameplay a bit, as well as some info on a new multiplayer mode.

The latest patch notes should compliment the upcoming DLC pack, “Lost Relics”, set to arrive on Xbox LIVE later next month. It will provide 4 new maps, some weapon and armor skins, additional achievements, and a whole new mode called “Breakthrough”. So far, we know that it’s objective gametype that pits two teams against each other:

One team has possession of a flag that they must deliver to a set location; the opposing team has a purely defensive role and unlimited resources. The attacking team must break through the enemy team’s defensive line and deliver the flag before their pool of lives run out.

Not exactly co-op oriented, but at least we get an idea of what’s to come very soon soon with the patch. But enough on the DLC! Check out the latest list of patch notes released from Epic Games:


-Fixed an issue that caused debug info to appear on the overhead maps when swapping out weapons.
-Scorcher magazine size reduced from 34-15 for private and LAN play.
-While holding the Boom Shield, female character heads are no longer more exposed than male characters.
-Prize Boxes will now deliver all unlockable content before rewarding XP.
-All gametypes will now have a rifle and a shotgun as the default loadout except for Free for All and Master at Arms.
-Fixed an issue with the Dreadnought DLC not appearing in VIP Overrun searches.
-Fixed an issue with the grenade animation.
-Reduced volume of self and team footsteps to better highlight enemy approach noises.
-Fixed the "You Lookin At Me" achievement German translation.
-The "Surprise" achievement can now be unlocked on dedicated servers.
-Fixed an issue where pressing the back button for the scoreboard caused the screen to blur until respawn.
-When searching DLC playlists on Execution and Master at Arms, screen will no longer freeze, forcing you to restart searching.
-Fixed an issue which caused game crashes while removing a storage device in the pregame lobby of a ranked versus match.
-All of the Survival map names should now show on the Survival leaderboards.
-Fixed an exploit where players could earn extra prize boxes.
-Removed unnecessary tooltips.
-Secret bookshelf passages in the Library map are now locked in Execution and Breakthrough gametypes.
-Fixed a typo in the current achievement list.
-Fixed an issue with the Engineer's sentry targeting Locusts being executed.
-Fixed Master at Arms gametype description.
-The Digger no longer misfires after swapping from a loaded Sawed-Off.
-Fixed an issue with Wretches teleporting back to perches.
-Fixed random crashes while accessing content from a USB drive at the title screen.
-Fixed an issue with the Generator not showing damage while being attacked.
-Campaign: Players will no longer be blocked by the missing stairs leading out of the Imulsion room in Aftermath.
-Gnasher ammo updates (start w/ two clips instead of one) for private and LAN play.
-Stim-grenades removed from starting loadout across all gametypes except FFA for private and LAN play.
-Weapon swaps now available per-map per-playlist on dedicated servers.
-Grenades no longer refill from Ammo Boxes.
-Minh’s hitbox adjusted for better detection around head.
-Mortar back on Gondola in place of Torquebow (dedicated server replication issues fixed).
-Mauler no longer able to hit things through walls.

The update will go live when the DLC arrives, but no official date has been announced yet (set for sometime around next month, however). We’ll let everyone know as soon as we find out. Until then, keep Horde Mode-ing it up!