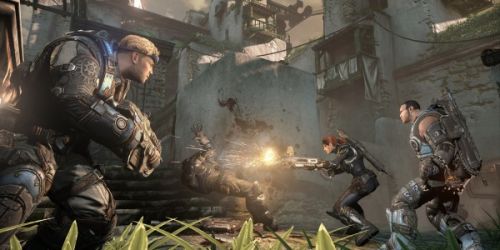 To date, Marcus Fenix has taken the limelight of every Gears of War box art to date, and rightfully so: he was the main character. This time around, however, it’s fan favorite Baird’s time to shine as head honcho, as Epic Games revealed on the official box art for Gears of War: Judgment! You have to admit, it’s much different seeing blond hair and blue goggles take up the center of this box art this time around. As far as we know, Gears of War: Judgment’s premise revolves around the backstory of super smart-aleck COG soldier, Baird, at the beginning of the Locust War. Many questions surrounding Baird’s history alone have yet to be answered, either through gameplay or written novel, which give the game instant drawing-in power for fans of the series. Story isn’t the only thing new coming from Judgment: new weaponry, characters, enemy Locust, and environments have already been revealed so far. We hope this prequel can clear up a few things on what made Baird the man he is today and provide the same level of co-op we’ve all come to know from a Gears of War title.

Be ready for Baird and crew’s swag and sarcasm in Gears of War: Judgment come March 19th.