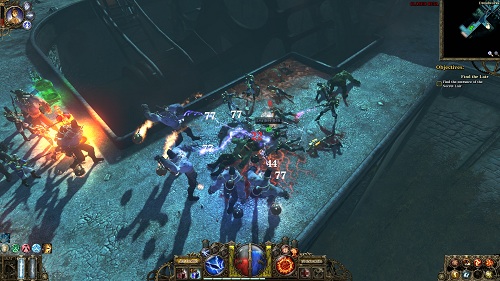 For those of you who didn't already know, The Incredible Adventures of Van Helsing is quite the game. Developed by Neocore Games, Van Helsing was a surprise ARPG hit that goes toe to toe with such industry giants such as Torchlight 2 and Diablo 3. We did a review of the game last week, in case you wanted to check it out. One of the criticisms of the game was that it did not provide enough end game content, save for starting a new character on a different difficulty. Well, the folks over at Neocore seem to be reacting to community feedback, and have decided to offer a content update free of charge,

The Scenario DLC allows players to fight against high level monsters that go above the level 30 threshold from levels reached through the Secret Lair. Throughout the year to come, more monsters and levels will be added, alongside new items and boss fights. After future updates, players will earn "Heroic Deeds" that will make them even stronger.

It is nice to see Neocore supporting Van Helsing so soon after it has been released. It really is a fine game, and the Scenario DLC provides for more ways to get playtime out of your runs. The Incredible Adventures of Van Helsing is part one of a three part trilogy of ARPG games. It is available for the PC via Steam for $14.99, and supports cooperative play with up to four players online.