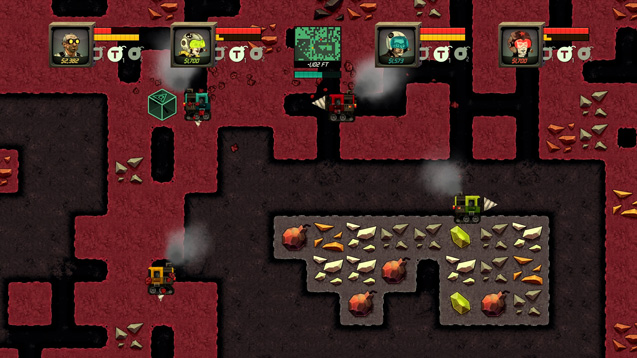 XGen Studios is a developer most known for their Flash based games, such as Stick RPG, Defend Your Castle, and Stick Arena Dimensions,  in addition to the occasional WiiWare title. They're looking to make a bigger splash in the console market this year as they release a sequel to one of their more popular games, Motherload, aptly named, Super Motherload. Slated to be release on PS3 and PS4, with PC and Mac releases at some point down the line, Super Motherload is a game that's all about digging in that lovely red Martian soil for valuables. Yet deeper, more sinister things lurk below Mars surface... which to me is kind of a "no... really?!" moment. I, mean, didn't a space marine already go through all this not once, not twice, but at the very least three times?!

Anyways, the chances that Super Motherload will set up the events of that particular franchise are very slim. What is certain is that the game, in addition to looking like some kind of Dig Dug/Bomberman crossover, will allow up to 4 players to play together on the comfort and safety of a couch. Though things may not always be cheery and friendly. Much like The Behemoth's BattleBlock Theater, Super Motherload will be "co-petitive" as players are essentially vying for the same resources and it's strictly a first come, first gathered business. There will likely be plenty of opportunities to "grief" your fellow players as explosives seem to be a necessary part of the game, as highlighted in this gameplay trailer.

No specific release date has been set for the title, just the usual teaser of "Coming Soon."