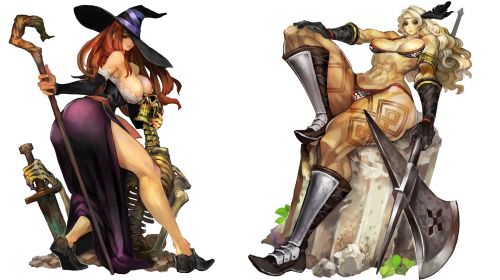 Two new gameplay videos have been released by Atlus for the upcoming PS3/Vita brawler Dragon's Crown. Vanillaware has really outdone itself with some fine, fine artwork, hence the loads of trailers and screenshots that have been trickling out over the last few months.

Starting things off, the Wizard is a spell caster (shock!) who can deal some serious elemental damage during combat. Fireballs are always effective at taking out enemies because, hey, fire hurts. Unless you're made of water, but in that case science has a little thing called evaporation it wants to tell you about.

Little miss Amazon (we use both terms sarcastically) is a muscle-bound melee fighter who could probably split stone pillars in twain just by sneezing in their general vicinity. Also, she's quite fond of kicking, which is probably just as well seeing as how her legs are about as big as, well, pillars.

Dragon's Crown features 4 player co-op with six different classes to choose from. It's set to release in North America on August 6 for both PS3 and PS Vita.