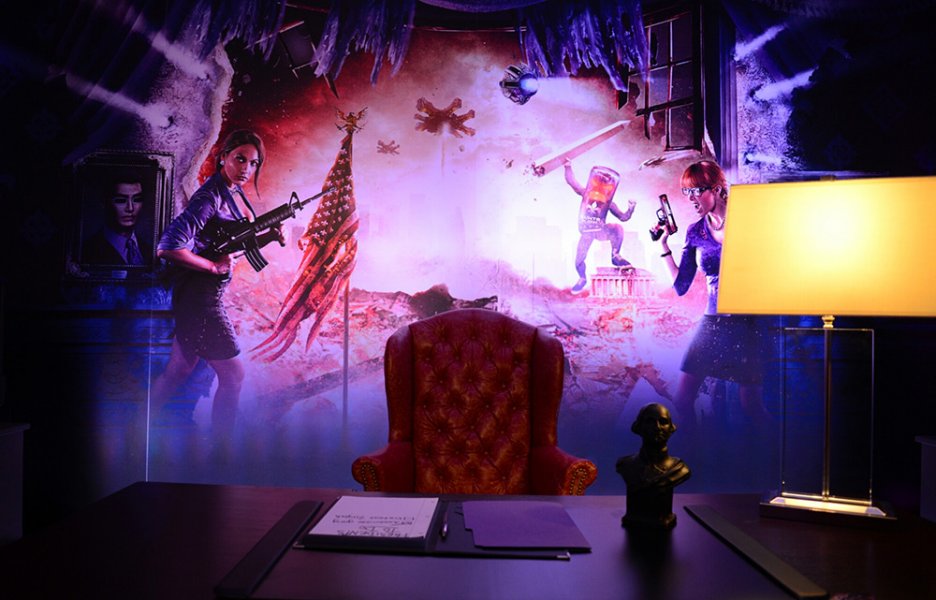 Saints Row IV opens five years after the events of Saints Row: The Third. The leader of the Saints (that's you) is now the President of the United States of America, your Vice President is Keith David, you've just cured cancer (or fed the hungry), punched an annoying congressman in the face, and you're on your way to the daily press conference. Suddenly, aliens attack, and our 30 minutes of hands-on time with the game begins.

After you fail to repel the invasion, the President and his Cabinet are captured and put into a virtual simulation of Steelport, where you have superpowers and access to an awful lot of over-the-top weaponry. While in the sim, you have the ability to run at hyper speed, launch yourself over buildings and glide through the air, seeking out collectibles that you can use to power up your abilities.

While stock weapons such as SMGs, pistols, and shotguns exist, the real stars are just flat-out ludicrous. The Dubstep Gun was probably my favorite, which sends out deadly beams of light that causes your enemy to glitch out, complete with digitized effects and heavy drops. There's a gun that tosses out miniature black holes that suck your foes into oblivion, energy swords, and pulse rifles. A customization system lets you change the appearance of a lot of your arsenal, and the demo equipped us with a burst-fire carbine modified to shoot lasers and look like a Super Soaker.

Rather than equip yourself with grenades, you have four special powers: telekinesis, which lets you grab/throw enemies and vehicles, a frost ray which freezes things and makes them susceptible to gunfire (or a solid kick), a high-powered ground stomp, and the ability to set yourself on fire, igniting all that surrounds you and adding incendiary rounds to all of your weapons.

Our demo time focused on letting us loose in the open world, and all sorts of familiar activities return, with a twist. Races are now on-foot and focus on you dashing around like the Flash, keeping your speed boosted by collecting orbs and hitting checkpoints. Flashpoints let you be as creative as you want as you destroy large packs of aliens, and you could simply run around punching bystanders in the face, or booting them hundreds of yards.

Locke jammin' with David from Volition

Saints Row IV, like its predecessors, features two-player online co-op throughout the campaign. It will be available on PC, Xbox 360 and PS3 on August 20th.