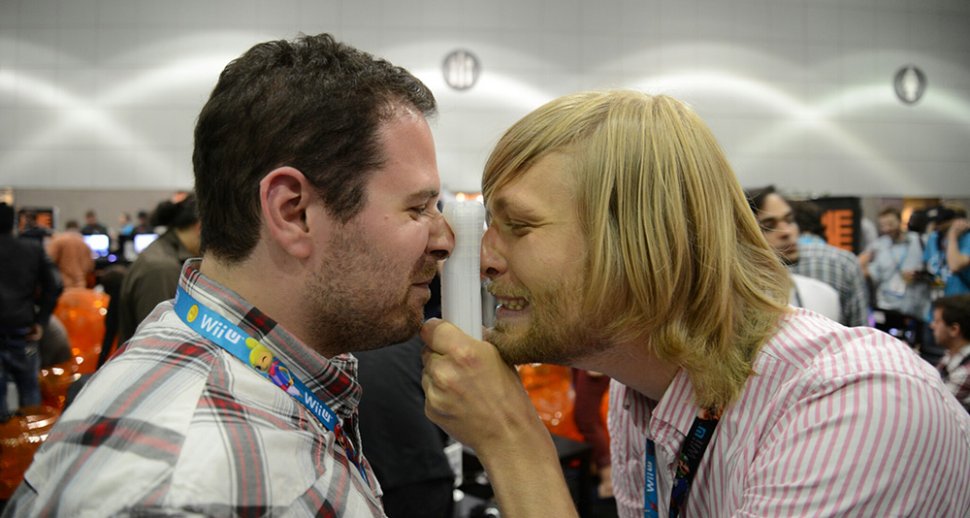 Well, this just happened. While checking out the IndieCade showcase at E3, we got to have a little hands-on time with WiiU indie title Spin The Bottle. Unlike the game I remember from my childhood, this one barely involves being rejected by girls who really don't want to kiss you, although I nearly made out with the lovely gentleman pictured above. *sigh* Someday.

Spin The Bottle is a new... spin... on the old game. Using the WiiU GamePad (and not the TV), up to four players take turns using the touchscreen to spin a bottle, which matches them with a random co-op partner and assigns you a silly minigame to complete. In our short time playing, we had to use our noses to hold the A and B buttons on a WiiMote together for a set amount of time, hold the WiiMote between ourselves and spin as fast as possible (mimicking a drill), and even dance together.

Successfully completing objectives gives you and your partner a flower, and the first player to hit three flowers (and their partner at the time) are considered the winners. It'll surely be a hit at parties, especially when alcohol is involved. As silly as it sounds (and looks), I had a lot of fun, and the developer promises regular updates to the available minigames. Interestingly, they're choosing to use the Minecraft pricing model - buying in early locks you in at a lower price, and as content is added, the price for the game will increase accordingly on the eShop. We'll see how that works out.

In the meantime, enjoy the picture above (I know Nick couldn't stop laughing), and look forward to Spin the Bottle's release for WiiU in July via the eShop.