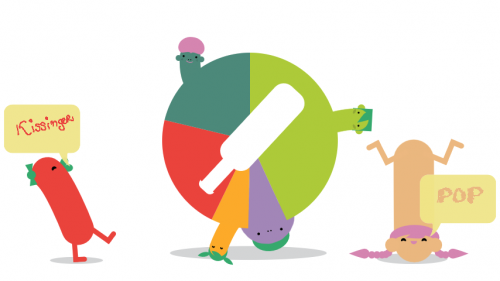 A new party game is coming to the Wii U this May. Spin the Bottle will allow up to eight players to spin a virtual bottle and touch each other inappropriately. Fun! You need a Wii U game pad and two Wii remotes to play. How's this for a spin? You don't need a TV display, so it will be easy to play this game anywhere around the house, including the family room, the dining room, or your alternative lifestyle role-playing area.  As long as the game pad and the Wii U can still whisper sweet nothings to each other, you're in business. (They have to stay connected.)

The two teaser videos don't show any gameplay, but they are absolutely overflowing with colorful, disembodied boners. (I asked. I'm allowed to use that word three times -which makes sense, if you think about it. Better make them count.) Don't believe me? Check it out as the saddest boner in the world bulldozes a bunch of her(?) friends into a big pile of dismembered members. It looks like a good old fashioned game of spin the bottle, until they attempt to summon Satan at the 35 second mark.

You know all that dead air after the summoning? That's when the magic happens. It's blackout fun! Only this time it's such a bodacious blackout, it's a whiteout. Then the game's logo is imprinted on your soul, and it's whiteout time again. Congratulations. It's tomorrow.

In this next video our little party phalli are in a better mood. Listen to them hum, sing, and chirp as they suggest beloved games like "Grab the Rooster," "Pass the Badger," and "Rocketman:"

That was not the secret I was expecting.

Spin the Bottle will allow eight strangers to become more than friends sometime in May. Boners.