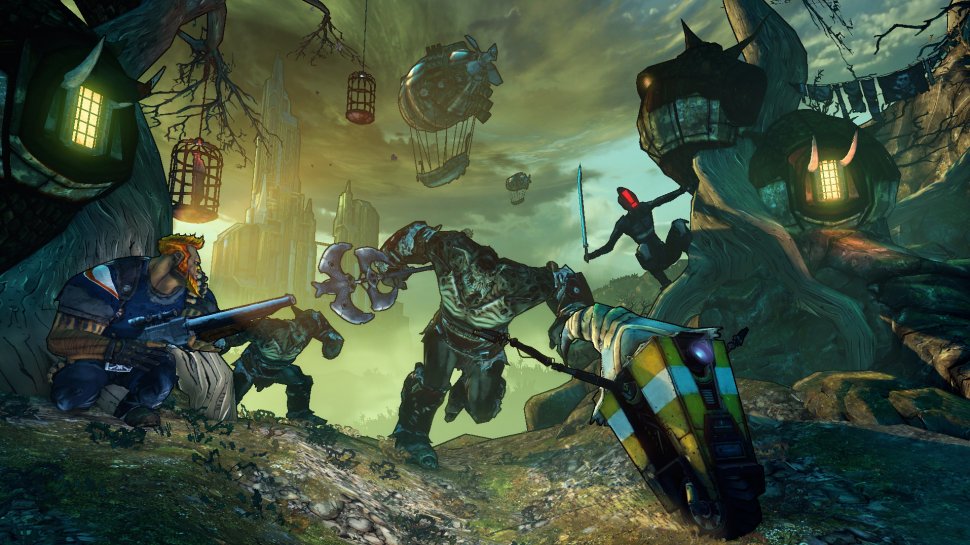 I feel like I stepped into an entirely new world apart from the chaotic Pandora. Technically this is true, since Tiny Tina's Assault on Dragon Keep, the latest DLC for Borderlands 2,  takes place in a “Dungeons & Dragons” inspired fantasy game controlled and narrated by Tiny Tina. Anyone who’s encountered Tina before knows how insane she is, but all the more hilarious than practically anyone in the entire game.

Tina has a way of forgetting, not caring, or having her way all the time, and she doesn’t treat players any differently than before in this DLC. She’ll constantly leave buildings and passageways out of place (or even non-existent), or will make enemies much too powerful for players to handle. She’ll change random things left and right, such as adding characters to aid in the player’s questing. Luckily, the Vault Hunters are quick to call Tina out on her shenanigans and allow you continue normally, or as normal as things can get. AoDK’s environments are breathtaking. I feel as though all the areas in Borderlands 2 are full of detail and very well designed, but AoDK provides an entirely different atmosphere than I’m accustomed to in a Borderlands game. Rarely do I see fully leaved trees, with mystical ruins scattered about the forest. A massive Dwarven cavern filled with giant stone gollems, or a sky-high stone tower with dragons abound, ready to be ascended. In short, I felt like I was playing Skyrim with guns and my Mechromancer felt like she was right at home.The only things that look the same are the main characters in Borderlands 2, which Tina puts in very appropriate places. Needless to say, I will be returning here when I go to see the second installment of “The Hobbit”. Throughout the quest, you’ll be collecting a lot of eridium bars to spend on shrines found around the areas. They will grant players various buffs for a short period of time, such as increased critical hit damage, or boosts in ammo stock. While this might sound good at first, your eridium is much better spent at large loot chests with dual dice lain on top of them. By choosing to fork over some eridium to increase the quality of loot found in the chests, both die will spin and generate a number. The higher the number rolled (the highest I received was 20), the greater the quality of loot found in the chest. I was very lucky to get my hands on tons of purple weapons that served me well in the main storyline.

I was thoroughly surprised midway into the DLC when a familiar face came back to aid my cause of finding the missing queen of the land. I don’t want to spoil much, but I will say that this individual was very much missed in the main Borderlands 2 storyline. The crazy boss fights with evil necromancers and wizards got me so pumped up to the point that I wondered how the ending could get much better. Once I got to the top of Dragon Keep, I was immediately proven wrong. After an epic fight with the ultimate enemy, I couldn’t contain my happiness during the post-battle event. One of the best arrivals of any character I’ve ever seen (besides Scooter’s intro vid) happened here and I still have a smile on my face thinking about it. The developers clearly had a ton of fun making this final add-on and it shows in so many different ways. The only beef I had with AoDK are the enemies, particularly the stacks of skeleton soldiers you’ll find 90% of the time. Almost all of them have this special jumping-lunge attack that instantly breaks your shields and keeps you constantly on the defensive. If you can keep moving, these hordes of undead will certainly have a harder time taking you down, but it gets increasingly harder as more advanced skeletons, such as the Badass Mages or Necromancers, will slow you down with magic spells.  If you aren’t playing with a co-op friend, the Restless Skeletons will become a problem if they aren’t dealt with right away. Since they can only be killed by pulling the magical swords from their backs, if you’re ever incapacitated with no other enemies to kill for “Second Wind”, you’re totally screwed. Though I was lvl 50 at the time (the DLC requires you to be lvl 30 to play it), I still had a somewhat difficult time overcoming the sheer number of enemies that can do the lunge move, while having to fight strong foes both on the ground and in the air. However, the enemies do fit well very well with the setting provided and shouldn’t be too much of a problem if you have friends to accompany you.

In the end though, it’s Tina and her wild imagination that make this DLC worth every penny. Her dynamic with the rest of the vault hunters is what allows this DLC stand out from the rest, apart from the touching story that unfolds as you play. Some of Co-Optimus staff compares this DLC to the Zombie Island of Dr. Ned from Borderlands 1, arguably the most original of the DLC’s released for that game. If you’ve hesitated on buying any of the previous Borderlands 2 add-ons up until now, I wouldn’t pass on this one. Apart from the huge amount of space to explore, quests, achievements, story, and beautiful landscape to soak in, it’s totally worth the 800 MSP. I highly recommend it to anyone in need of final closure from Borderlands 2.