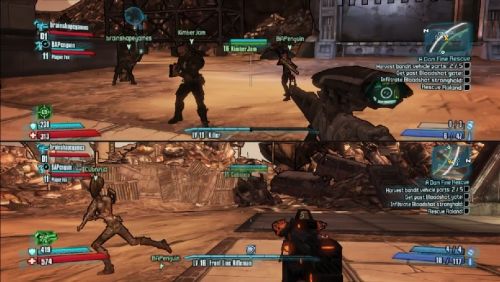 It always boggles my mind why more PC games don't support split-screen play.  A lot of gamers definitely have a PC with the horse power to support the video rendering required and many folks have gamepads hooked up to their PCs with most games supporting that method of play already.  It's especially mind boggling with a game like Borderlands 2, which out of the box on the console supports some of the best split-screen configurations we've seen to date.  Sadly though, PC gamers are left with making up their own solutions.

Gearbox forum user Sycdan has come up with an ingenius way to play the game in "split-screen" by utilizing a program called Sandboxie and several other helper applications.  By doing so he's essentially running two copies of the game side by side (in separate windows) and then uses LAN play to actually co-op together.

In the end you'll only need one copy of the game to make this work, so that's a definitely plus, but remember your computer is doing double the work.  If you have multiple monitors you can even each get your own screen.

If you're ready to dive in, head on over and read the full post.  Be warned, there's a lot of midgets you'll have to toss (that is, several separate programs to install) to make this work.