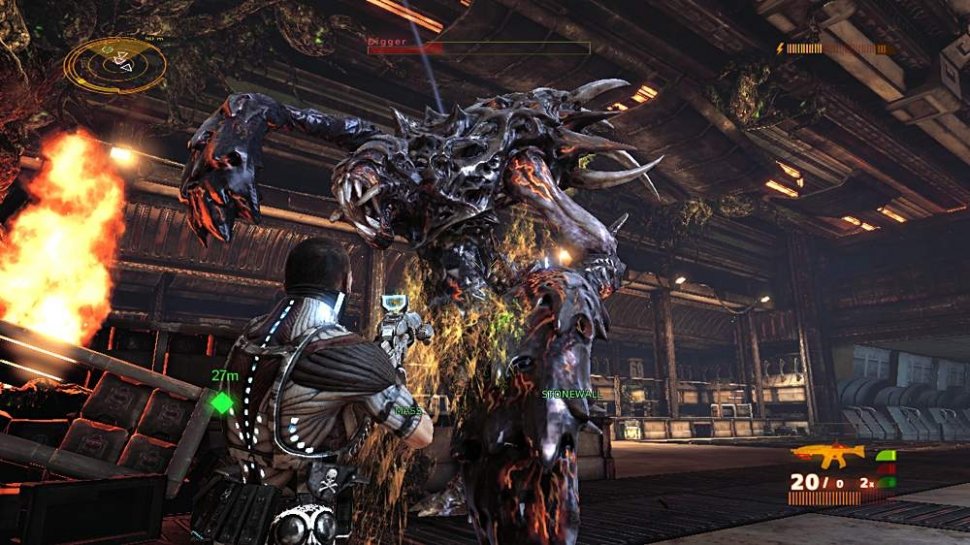 Scourge: Outbreak is available from the Xbox Live Marketplace today. The third-person sci-fi shooter focuses on squad-based co-op and the entire campaign is playable cooperatively. Gamers will take on the rolls of Echo Squad, yet another group of powered-up super soldiers who look like they popped right out the Unreal Engine 3. Amp, Mass, Shade, and Stonewall are vying to save the world from an evil terrorist organization, or mafia kingpin, or global corporation, or whatever. Does it really matter? Shoot stuff and have fun.

We have a handy video which focuses on the cooperative theme of the game. Player powers, perks, and XP unlocks will all come into play. This title will be going for a mere $10 and it might be the thing you need to get through the holiday weekend.

The video does a good job of highlighting some of the co-op features in Scourge: Outbreak, but there's one glaring problem. It's almost exclusively made up of split-screen footage. This game does NOT support local co-op. Couch co-op buyers beware.  If you look closely you can see text at the bottom of the screen stating: "Split-screen footage included solely to help show Co-op gameplay. Game does not support split-screen mode." Well that kind of sucks. You'll have to play online if you want to play with a friend. If you don't have four players, friendly AI will fill in. Good guy AI can make or break games like this. Considering the price tag, I think you may want to make sure you have a full human crew for this one.

Scourge: Outbreak supports four player online co-op. It launches today on the Xbox Live Marketplace for 800 MSP, or $10. It will come to PC and PSN at a later date.