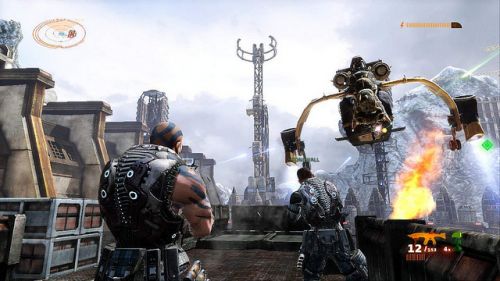 While we may have found quite a few faults in The Scourge Project, it appears developer Tragnarion didn't sit idely by while develping the console version.  In fact, the console version isn't even the same game as the 2010 PC 3rd person shooter, instead Scourge: Outbreak is a brand new game built from the ground up for console gamers.

We fired off an email to Tragnarion to get the skinny on just what to expect from the four player co-op shooter when it launches later this year on PSN, XBLA and Mac.  Studio head, Eugenio Vitale responded.

Q: What are the differences between SCOURGE: Outbreak and The SCOURGE: Project, which released on PC in 2010?

The Scourge Project was an episodic game for the PC - the format and the game-play mechanics were not suited to the console market. With the Outbreak our intention was to target the console market with a product made for console players ground up: we started from a core of ideas that worked very well previously and build around them. To mention few highlights, the Outbreak features new game-play mechanics, new and higher number of characters, deeper story line, new AI, a good number of new locations and maps, a characterization and XP system reflecting into your character evolution, next-gen graphic quality, 4 players in coop campaign and to 8 players in PvP, everything fully packed of fast paced action. 7 hours of campaign and 5 multiplayer maps included with the game with DLCs to follow.

Q: Does the game still support four player co-op play?  Is there any split-screen play on the console?

Absolutely. One of the winning feature of our products has been the social aspect of gaming: so coop is definitely there and the scenarios and action piece are made to entertain up to 4 people.  There is no split-screen, you can play LAN or Internet though.

One of the stand out features of The Scourge Project was how he flashback sequence was from your own character's viewpoint, so while playing co-op, you'd chat about exactly what you saw in your cut scene with your squad mates.