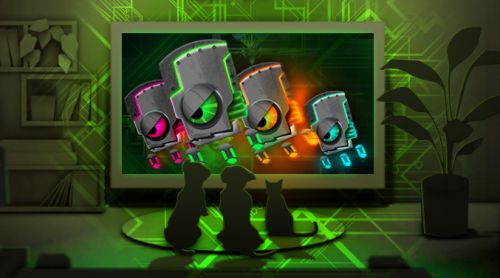 A Virus Named TOM celebrates its one year anniversary with a 75% off sale! If your eyelid closing/opening cycle is 22 hours long, don't blink or you'll miss it.

If you can remember back to August 1, 2012, developer Misfits Attic released a puzzle-action game called A Virus Named TOM. We liked it, pretty much everybody on Steam liked it, and high quantities of fun were was had working with our co-op buddies to solve puzzles. Great visuals, good challenges, an all-around nice time.

To celebrate a year of existence, A Virus Named TOM is currently on sale for $2.50 ($3.00 gets you the game plus soundtrack). The only catch is the price returns to normal at noon EDT on Saturday. Not a lot of time, but that's not a lot of spacebucks to spend, either.

A tidy list of features in A Virus Named TOM:

Head over to the official site to get a DRM-free copy, or grab it on Steam. Misfits Attic is also holding a contest to design their official Steam Trading Cards, in case you're artistically inclined.