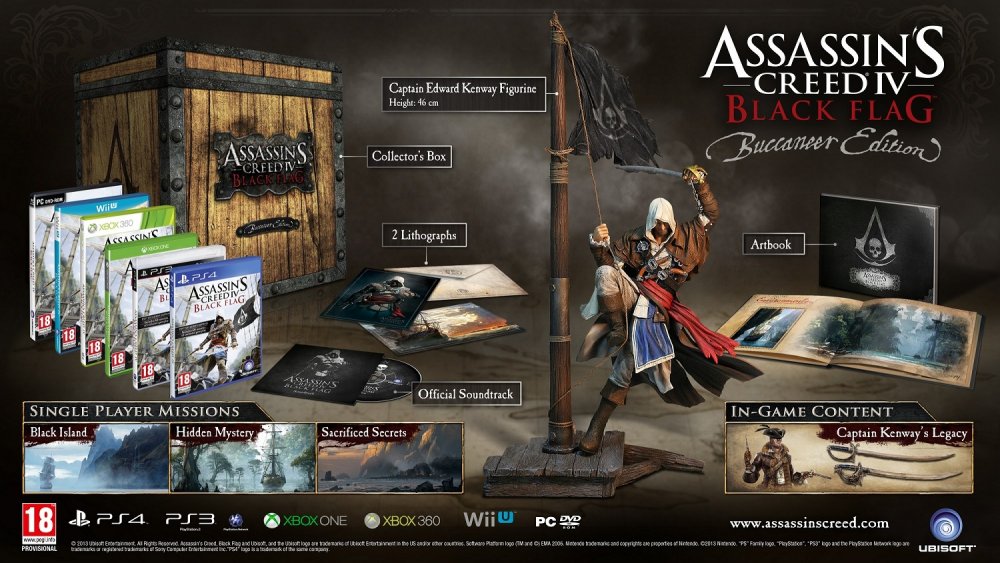 3 additional solo missions for an extra 45 minutes of gameplay:
Black Island: Captain Morgan’s favorite ship has sunken off the coast with a full load of legendary sailing equipment. Explore the Black Island and retrieve these items Pirates have desperately been looking for.
Hidden Mystery: Follow Stede Bonnet’s path and find the secrets of his adventures on the beautiful island of St Lucia.
Sacrificed Secrets: Recover Captain Drake’s lost treasures, including golden flintlocks and cutlass when exploring the exotic island of Sacrifices.
Additional Single & Multiplayer items:
Captain Kenway’s Legacy

Assassin's Creed IV is coming to PS3, PS4, 360, One, Wii U, PC and will have an online 4 player co-op mode that is yet to be fully revealed.  What Co-Optimus does know is that GameStop and Game will be selling the Buccaneer Edition in their respective countries.  Ubisoft have kindly provided a slick unboxing trailer to show you exactly what you will get on October 29th if you decide to buy big: