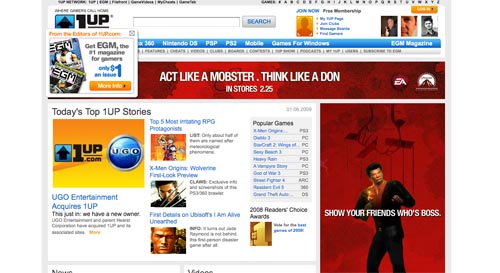 Lets face it, this economy sucks.  Further evidence has occurred this evening as Ziff-Davis has sold off their online gaming network 1UP to Hearst Corp, owners of the UGO network of sites.  While nothing is officially confirmed yet, it appears 1UP.com is going away, as is all the podcasts.  Several of the staff members use Twitter (as do we) and have made it know that they are laid off.

Ryan O'Donnel of the 1UP Show said this:

I just got laid off! Great! Thanks 1UP Show fans. It's been real.

Twitter "ShaneWatch" - one in which numerous 1UP Staff members use said this:

We're all bummed about a lot of stuff, but this is the thing that's hardest to let go. Goodbye from Phil, Nick, Anthony, and Shane!

These folks were members of the news team, video team, and podcast teams.  We wish everyone the best of luck.  Many of these folks are personal friends of mine, and I hope they land on their feet somewhere.

You can continue to follow the whole mess over on the official 1UP boards.  Of course I don't blame you if you don't want to give them anymore traffic.

Update:  Gamasutra has confirmed via a leaked memo that videogame magazine EGM has been cancelled as well.