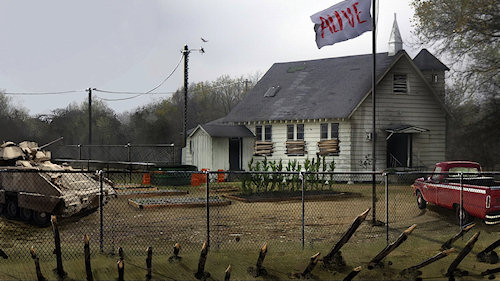 Lets face it, the whole zombie survival thing is starting to head the way of the World War 2 game.  It's being done...to death.  So when a new zombie survival game gets announced, there is usually a collective groan.  But the newest game from Undead Labs code named Class3, might be one to actually watch out for as it aims to do things a little different.

What sets this game apart is it sounds a bit like an open world style game with a bit of strategy.  The mantra of the game is - "What would you do in the face of the zombie apocalypse?"  With that comes hunting and gathering of materials and weapons, base building, and of course - blowing zombies heads off.

Joystiq had a chance to speak with the game's creator, Jeff Strain.  In the interview he confirmed the game plans to support two player online and local co-op.  Each player's world would be unique to them - set in the fictional city of Dunnaway, and played from a 3rd person perspective that also promises to be high on action.  Players are given the choice to build out and fortify a home base with the ultimate goal of discovering what triggered the zombie apocolypse.

Here's a bit from the interview that looks to set the game apart from others:

On top of armaments, players will also need to keep a constant eye out for other tools necessary for their survival -- Strain named copper wire, food and (for more permanent zombie-free settlements) fruit and vegetable seeds as examples. Players will also need to rescue "human resources" who can help in their plight, such as electricians who can help repair any damaged electronics in their home bases.

Class3 is a prequel  to an MMO by Undead Labs code named...Class4.  Class3 is set to come to Xbox Live Arcade, but don't expect it anytime soon.  In fact, it doesn't sound like it'll even be shown until next year sometime.  By then we'll have even more zombie games on our plate - so hopefully Class3 is still able to pull off its ambitious plans.