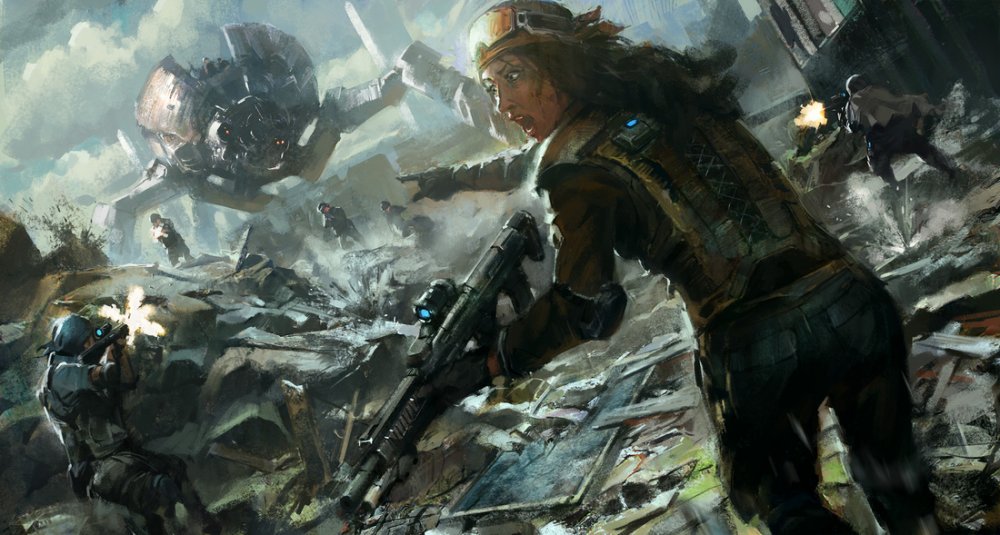 What if we told you that there's a new co-op shooter game currently in development that combines elements of both Left 4 Dead and Shadow of the Colossus? No, we aren't joking around here, it's already a year in the making. Bringing together various developers from Crytek, Ubisoft, and even Adhesive Games (the creators of Hawken), Outrise aims to include a mashup of these two extremely popular video games in what seems to be the best ways imaginable.

The game is set in the year 2094, a group called the United States Federation are attempting to gain control of the world using the final currency in existence, CryptoCoin. Outrise, a resistance group made up of hackers have banded together to bring down the Federation by defeating their goliath, robotic machines of war. Essentially, players will be able to work together to survive massive robot assaults while trying to bring them down at the same time. Think of Half Life 2 during the City 17 resistance sections, or possibly Halo 3 with Master Chief bringing down Covenant scarabs. James Wearing, Project lead of Outrise, spoke about their game to Polygon, describing the game came about his love of 80's sci-fi:

“I wanted to build something that was old school in its charm. I grew up watching RoboCop and Terminator, so I wanted to make a game that had the magic that old school sci-fi had that we don’t really see any more.” While several developers have been working on the game in the spare time over the last year, they haven't established any sort of studio to make it a full production as of now. However, they hope to raise funding in the future, as Wearing stated:

“We’ve gotten it conceptually to a place where we’re ready for the next step. We’re exploring funding options — it could be Kickstarter, it could be private money — we’re open to whatever the right path might be.”

Unlike the 4-player only co-op found in a Left 4 Dead title, Outrise will boast an awesome 16-player co-op mode where each player will have their own customizable loadout when on the battlefield. Additionally, there will be public matchmaking, private lobbies for co-op players, random boss robot encounters, and more!

As of now, we do not have an projected release for the game, nor do we have any information regarding the game's potential funding. We do know, however, that this game sounds like an amazing idea for a co-op game on the latest generation of consoles and Steam. Any info we hear on Outrise, we'll be sure to cover it. In the meantime, do check out the small sample of concept art featured below. Let us know what you think of the game idea!