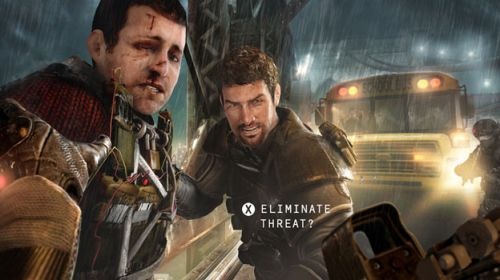 Hello, my name is Samoza and I have a confession to make - I like single player games. Co-op experiences are fantastic, but sometimes you want to be alone.  One such case is the sublime Heavy Rain - a game so infused with emotion that my partner sat and watched it like a film as I played (not so alone then). Rainbow 6: Patriots is a game aiming to do something very similar.  Therefore, the news that Heavy Rain designer Jean-Sebastien Decant is taking over as creative lead must be a good thing.  Or is it a sign of the development struggling?

One of the main selling points of Patriots is the new decision system that will put you at the centre of several moral conundrums e.g. do you kill one innocent man to save many?  This was the type of quandary that Heavy Rain placed the player in; do you sacrifice your moral beliefs to catch a killer?  With Decant's expertise in this style of gaming it would make sense to have him on board Patriots, but is it an indication of deeper issues?  CVG notes that several of the lead designers of the game have left:

The R6: Vegas games are fantastic slices of co-op entertainment so hopefully the latest game in the franchise remains on track.  Co-Optimus are going to go with the positives in this story and hope that Decant will add much needed pathos to an action game that is already looking excellent.  Perhaps he can give each enemy a touching backstory as we despatch them without mercy on a Terrorist Hunt map?