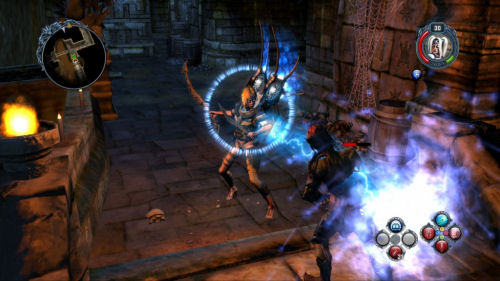 Late last year the Co-Optimus crew dug deep into Sacred 2: Fallen Angel for the PC. It was an indepth Action/RPG from European developer Ascaron. Now several months later both the Xbox 360 and PlayStation 3 are getting their own versions of the game, nearly identical to the PC counterpart.

We talked with Mario Kroll, Director of Marketing and PR from cdv Software Entertainment USA, about the console ports and how the game's four player co-op mode will work in our living room.

Co-Optimus: How does Sacred 2 differentiate itself from a game like Diablo?

Mario Kroll: For starters, the Diablo series never made it to console. (editors note: it actually did)  So, at its most basic level, this will be the first massive action-RPG with a very classical hack-and-slash feel for it that gamers can enjoy not only on the PC, but also on the Xbox 360 and the PlayStation 3. With that said, the game world in Sacred 2: Fallen Angel is truly massive, some 22 square miles of explorable content, both above and below ground. It also features up to four-player drop-in/drop-out multi-player over Xbox Live or PlayStation Network. (The PC supports up to 16 players.)

Co-Optimus: What design changes were made for the console versions? Was it more or less challenging than a PC?

Mario: All three platforms share a common codebase. What that means is that the content, in terms of characters, plot, monsters, and the hundreds of quests, is identical. Each platform, however, benefits from graphics optimized for that version and an interface specifically designed and optimized for the platform. So, while on the PC, gamers can expect the typical mouse and keyboard controls and things like manually managing inventory grids, the console versions use a much more streamlined approach. Examples of this are the ability to pick up all dropped items and loot within a radius through a bumper pull, or completely freeing up the player to allocate weapons, armor, combat arts, and other items as they best see fit through a combination of triggers and controller buttons.

PC and console versions all each a challenge in their own right. While on the PC one struggles to ensure the game runs well on even older machines and there is less standardization in terms of hardware and software that the developer can count on being installed, the consoles are also limited in terms of total memory, processor speeds and graphics capabilities, so all of it has to be carefully balanced. The shared content, however, really was of benefit, as the developers could apply lessons learned from the PC version and really focus on console version in terms of polish and enhancement. 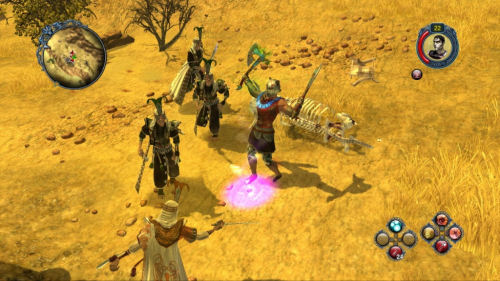 Co-Optimus: What co-op options do console players have? Will players be able to pair up on one console with other players on Xbox Live/PSN?

Mario: Yes. You will be able to play with up to four players total with up to two per console. Players can join the game by plugging in an additional controller or by joining online games via Xbox Live or PSN.