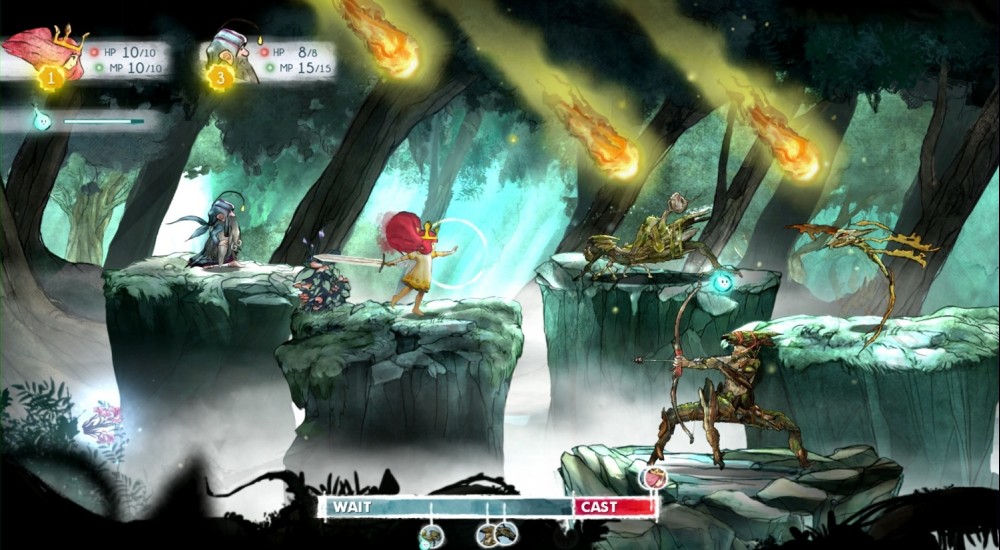 This game in particular not only caught our eye with its beautiful art style, but with its simple cooperative mechanics shown through the gameplay. Since Ubisoft's Child of Light isn't too far off from release, a new trailer was uploaded to showcase the game; a special co-op trailer this time!

For those of us who haven't already heard of the game, Child of Light is both a side-scroller and RPG title rolled into one. Up to two local players can explore the enchanting world and battle together as a team. While player-one controls Aurora, a princess on a quest to rescue a number of celestial bodies from an evil Queen, player-two gets to control Igniculus, the small ball of light that follows and aids her.

Whether it be activating objects for puzzles, revealing hidden areas to discover, blinding enemies during battle, healing damage that she takes, Igniculus plays an integral part the game. Aurora takes care of the rest with her platforming skills and dispatching baddies with her sword and magical abilities. The official co-op trailer shows off some of these aspects in gorgeous ways:

It will certainly be interesting to see how this new IP will stand out from the crowd, if not solely for its co-op elements. Though they seem simple at first, like player-two lighting the way for player-one in the dark, there seems to be much more than meets the eye here. We'll definitely be keeping ours on this one for next month.

Child of Light will be released this April 30th on most major platforms.