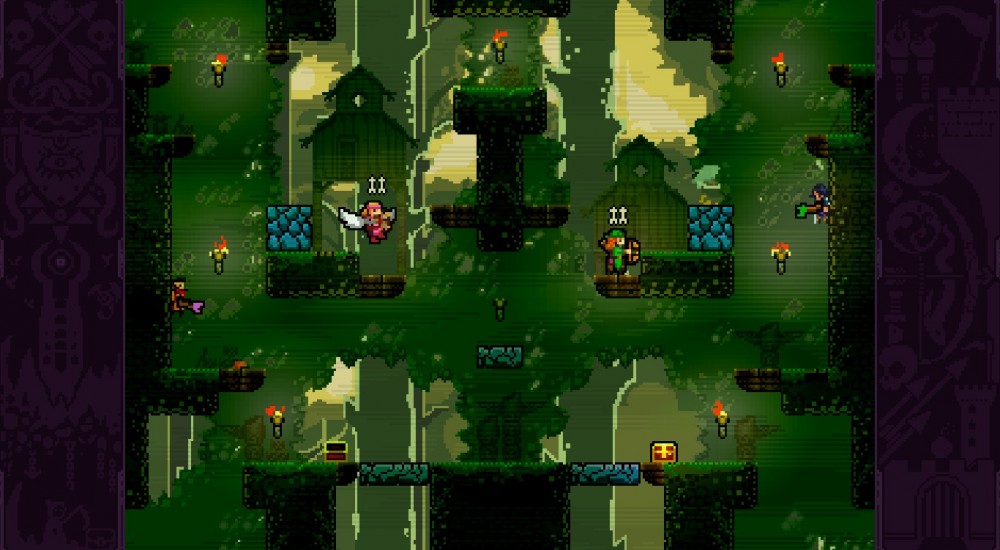 With TowerFall Ascension's release on the PS4 and PC only hours away, the new co-op modes coming to the PS4 version have certainly grabbed our attention. We have a bit more info regarding the new co-op mode, "Quest Mode", that should be quite a blast to play.

As we had mentioned at the time the game was revealed, Quest Mode has been added alongside the popular multiplayer mode the original game is most known for on OUYA. There is a new a Time Trial Mode for speedsters out there, but we're here to focus on the Quest Mode. For those of you who are new to TowerFall, the game involves 2D combat action within large chambers. Players are tasked with defeating enemies using various weapons, primarily a bow and arrows. The four-player local multiplayer mode is focused mainly on deathmatch gameplay.

Quest Mode, however, pits up to two players against hordes of enemies, with each set growing in number and strength; essentially a normal Horde Mode found in many modern games. While players are trying to work together to get as far as possible, the distinct element of always including friendly fire will certainly become a concern for most co-op session. Since each co-op player can hurt the other, it would be wise for them to communicate and divide up the enemies onscreen and, most importantly, stay out of crossfire.

While the friendly fire aspect might pose a bit of a hindrance to some, this setting can also prove to be a powerful strategic maneuver to help out a partner in need of ammunition. Arrows that miss their targets normally can be picked up and reused by any player, adding some new teamwork and survival elements to the gameplay. This also works with sharing scattered power-ups or grabbing treasure chests full of weapons around each stage. There is also a limited number of lives given team at the start, so be mindful of the death toll. TowerFall Ascension is a 2-player local co-op game that will be arriving tomorrow, March 11th, on PSN and Steam