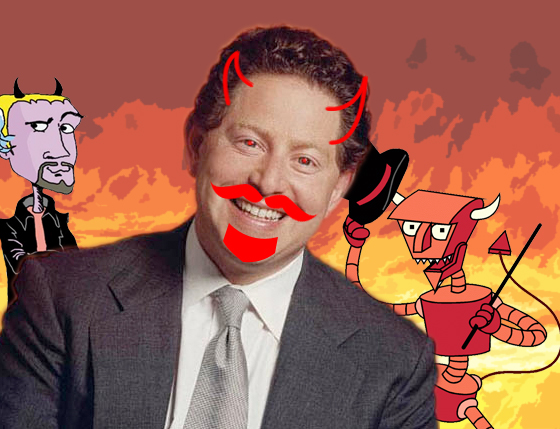 To introduce this news post, we give you an inside look at the actual day to day operations of Co-Optimus.com, archived from 11/14/08.

My latest news post go too far?  Let me know and I can neuter it.

Heh.  Perhaps saying the (Activision) CEO's middle name is Lucifer might be a bit too far. Otherwise, it's cool.

Edited that.  Thanks Nick.

Yes, in the spirit of co-op, the kindly editors of this site chose the high road in this situation.  But just look at what ArsTechnica has to say about him.  Here's a hint: we stole the picture above from them.

We totally agree: Kotick has rained fire and brimstone down on far too many co-op games.  Guitar Hero has been used and abused, and has fallen, in our opinion, from it's place at the pinnacle of the music game genre.  He wants to make money off user content, as we talked about in Billy's Soapbox.  He let Ghostbusters go because it had limited sequel oppurtunities.  Bobby "Lucifer, Beelzebub, the Harbinger of Death, Slayer of Worlds, and All Around Mean Guy" Kotick may be great for stockholders, but he's bad for gamers.