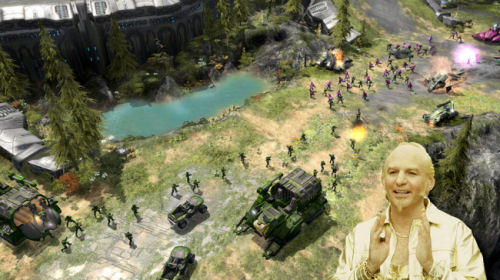 Microsoft has announced that Halo Wars has gone gooooooooold and will be ready for its late February release.  Halo Wars for the Xbox 360 is Ensemble Studios last game, and features a "ground breaking control scheme" for a console RTS.

On February 5th you'll be able to see for yourself as the Halo Wars demo will become available to download on Xbox Live Marketplace.  The demo will also include “Chasms,” one of “Halo Wars’” 14 multiplayer maps, wherein players can battle it out in Skirmish mode vs. A.I., playing either as the UNSC or as the Covenant - each with own unique abilities.

Also released today is the first vidoc for Halo Wars.  You can download it on the Xbox Live Marketplace or queue it up on your console here.

Halo Wars features a 2 player co-op campaign playable via Xbox Live.  Look for it on March 3rd in the North America for an MSRP of $59.99 Standard Edition and $79.99 Collectors.