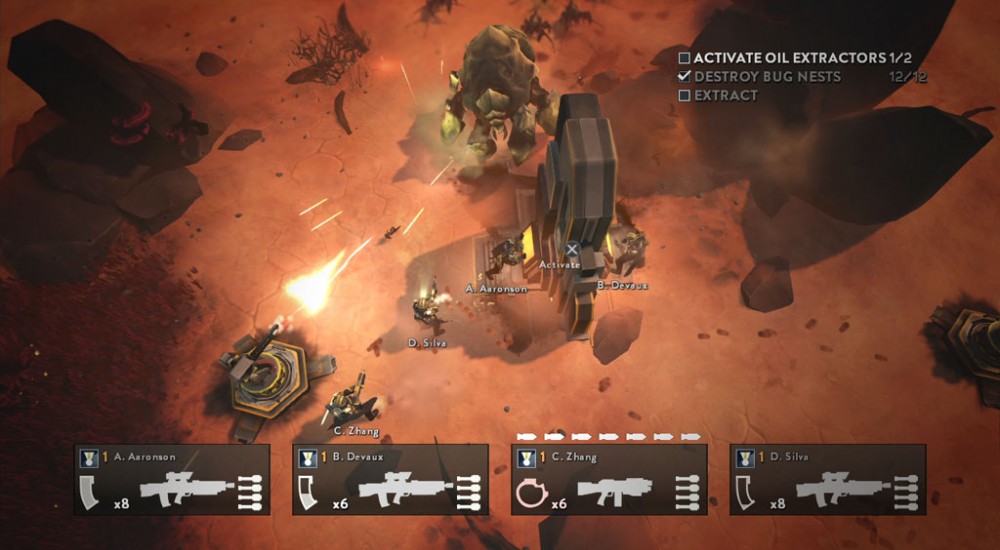 We died forty three seconds into the Helldivers demo at the PlayStation booth at E3 2014. Justin and I looked at each other and contemplated giving up right then and there. Having spent more time on the menu and loading screens than actually playing we had to miss something. So back into hell we dove again.

We died one minute and fourteen seconds later.

Helldivers is a tactical twin-stick shooter for the PlayStation 3, Vita and PlayStation 4 developed by Arrowhead Game Studios - famous for the Magicka series and also working on the Gauntlet reboot. From what we could gather players are given a planet to in which missions take place on and it's up to you where on that planet you drop in and take on the objectives. Before dropping you'll equip your cloaked killing machines with various weapons and abilities.

Once planet side you can hit your d-pad to bring up a minimap and find the various objectives. Hitting one outpost we were tasked with opening up a solar array - which involved hitting the X button and then entering a d-pad sequence that looked like the Konami code. While Justin showed off his fast fingers doing that I had to cover him from the swarms of enemies heading our way.

It turns out you can actually equip things like airstrikes, rocket launchers, mechs and more. These calldowns are mapped to those d-pad style codes. The more powerful calldowns take longer to actually reach the surface and might require more buttons in the combination. If you've played Magicka, this is very similar to the game's spell casting system. This adds to the tactical nature of Helldivers.

In terms of co-op, the game supports up to four players in co-op with included Cross-Play between any system - PlayStation 3, PlayStation 4 and Vita. We checked out the game on PS3 and it looked solid, but not anything special. I spotted the PS4 version nearby and it was noticeably improved in both texture and lighting detail.

So what happened after Justin put in the code? We actually completed our objective. We then proceeded to pull up the mini map on the procedurally generated world and headed towards another objective. We were soon ambushed and I accidently grenaded Justin. In the chaos that ensued I was mauled and it was game over. Like Magicka, Helldivers is as much about cooperating with your friends as it is accidently killing them. Apparently the death penalty is pretty light and there's an easy way to call in another soldier - but our unguided demo left us wondering how to do that.

The overall goal is to liberate planets from enemy races. Doing so contributes to an overall war that all players are working towards. This giant social co-op campaign's goal is to eliminate all three enemy races by taking out all of their planets. Once complete, the campaign restarts. If the players win, the difficulty will go up. If they lose, and the aliens overtake Earth, the difficulty will go down.

I wish we had more time with the game at E3 and got to see some of the more subtle nuances Helldivers has to offer. I've seen some videos that showcase 4 player co-op vehicles, tons of calldowns, and some really amazing chaotic battles. Sadly with the 15 minutes we spent with the game we saw none of that. Still there's a lot of potential for a more gritty and tactical co-op twin stick shooter - something we can definitely get behind.

Helldivers will be out later this year.