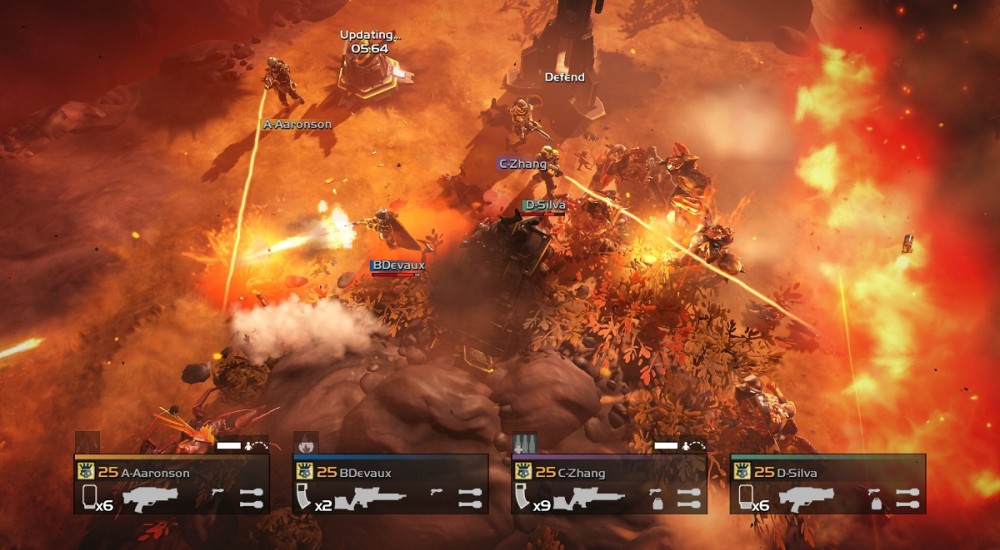 The first victory is ours, but the fight isn't over yet! HELLDIVERS got a whole slew of new content to keep the fight fresh on the frontlines. With new volcanic planets to explore, all new objectives to complete, and lots of new weapons and gear up for grabs, you and your fellow co-op players should be good for new content for some time.

Everyone in the community pulled their efforts together to help in winning the first Galactic War of HELLDIVERS! Congratulations, gamers! However, the fight for peace and freedom is far from over. Many more factions in the galaxy are still out there and New Super Earth is far from being completely safe from attack. It's time that we bring in these new, independent races into the fold of Super Earth. In the "Turning Up The Heat" DLC expansion for PS4, PS3, and PS Vita, players will be able to explore all the new content that developer Arrowhead has been working on. Additionally, the release of Reinforcements 2 DLC content helps to beef up the expansion with some extra goodies to bring onto the battlefield. This expansion includes the following content:

The following is what you'll receive in each DLC Pack:

HELLDIVER Specialists are highly trained offensive support operatives. They specialize in the use of Stratagems and supportive fire. They are specially trained to receive enhanced air support.

HELLDIVER Demolitionists are experts at tearing things down and blowing things up. They are rumored to be careless when handling explosives, though this is most likely just their familiarity with explosives being misinterpreted.

The Hazard Operative HELLDIVERS are trained in chemical and biological combat and protection. Sometimes shunned by fellow HELLDIVERS for their use of inhumane warfare, many a Helldiver is happy to have them on the mission when it comes down to life or death. It’s not like the enemy is Human after all.

The Pilot HELLDIVER is specially trained to operate the wide arsenal of vehicles available to the HELLDIVER troops. Especially trained in the use of the EXO-48 ‘Obsidian’ Exosuit, Pilots are some of the few that are given the honor of using this heavily armed monster. Though they prefer to use vehicles, they are still HELLDIVERS and very formidable troops on foot.

EXO-48 ‘Obsidian': A powerful exosuit with two double autocannons. The firepower contained in this walking monstrosity annihilates light and medium infantry, and the two