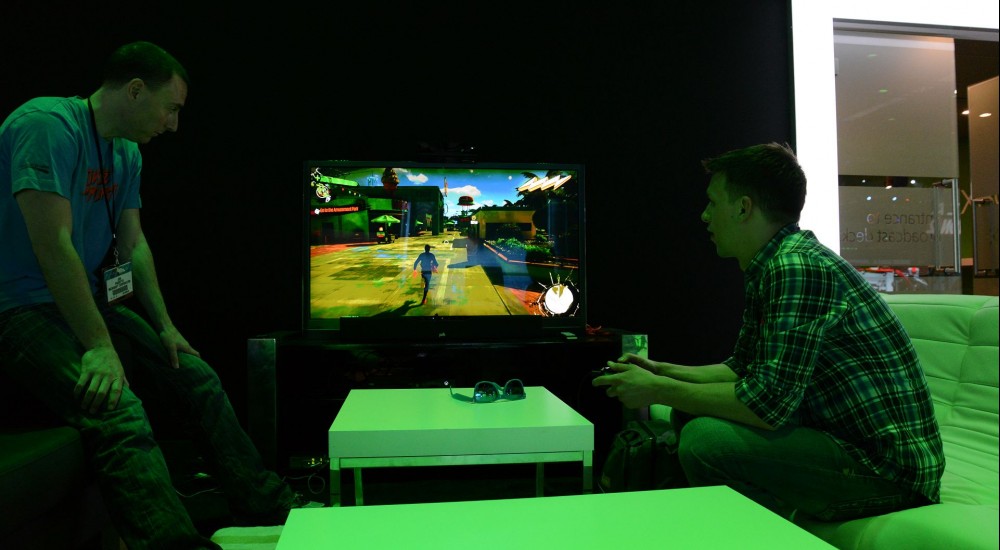 Jumpin' high, grinding on roller coaster rails, and blasting away mutants with just about any gun your mind can think of sounds likes a good time. But doing that with seven of your friends? Sign us right up. We got a hands on with Sunset Overdrive's single player at E3, and learned about its eight player Chaos Squad co-op mode.

We played the same level that Ted Price, Insomniac Games Founder and CEO, demoed at the Microsoft Media Briefing, and it was just as colorful and full of exploding enemies as we remembered. The game favors itself to non-stop action, and is best enjoyed when jumping one rooftops and grinding on rails while simultaneously picking off groups of mutants. You won't be taking cover, or even walking on the ground that much. While soaring high, dozens of enemies will flock to your position. The best kills happen when enemies are clustered together - by activating various traps and environmental hazards, you can take out large groups with a single button press. Of course it's an Insomniac game, so you'll have a plethora of unique weapons at your disposal. One gun, the TN-Teddy combines TNT and teddy bears (cause why not?). Another shoots vinyl records (that are way more deadly), and we saw a gun that shoots fireworks, exploding mutants in a colorful blaze.

Chaos Squad, the eight player co-op mode, is accessed anytime via single player by hopping in a photo booth and snapping a selfie. The same custom character you play as in single player is available online, and any bonuses you earn online are usable in your solo play time. With seven other players, you'll face swarms of enemies in a hoard mode fashion. Chaos Squad is divided into several rounds where all co-op players vote on various maps and different objectives to tackle. With a good variety of missions, from simple collection to more difficult timed base and other objectives; the more difficult missions will yield greater rewards and cash to take back with you into the single player experience. You'll also earn points for defeating enemies, assisting allies, and zipping through the areas without touching down on the ground.  The missions all culminate in a round of Night Defense, it's comprised of several intense waves of mutants attempting to breakthrough barriers and steal your supply of Overcharge.

From our eyes on experience with Chaos Squad, the name fits it well. It's absolute insanity, an explosion of color and disorder. The waves come in fast and furious with indicators letting players know where the mutants are coming from. The vats of Overcharge absolutely require teamwork to defend.

Despite what seemed like a meaty co-op mode already, we were told by several Insomniac developers that what is on display with Chaos Squad is only scratching the surface of Sunset Overdrive's co-op gameplay. Microsoft really seems to be backing the game in a big way too - it was one of the most heavily promoted titles at the show with a huge talking balloon in the lobby, window clings in most hotel rooms, and giant themed bus that took show goers to and from the convention center.

Stay locked to Co-Optimus for our upcoming video interview with Ted Price of Insomniac Games for all things Sunset Overdrive, which releases October 28th for Xbox One.