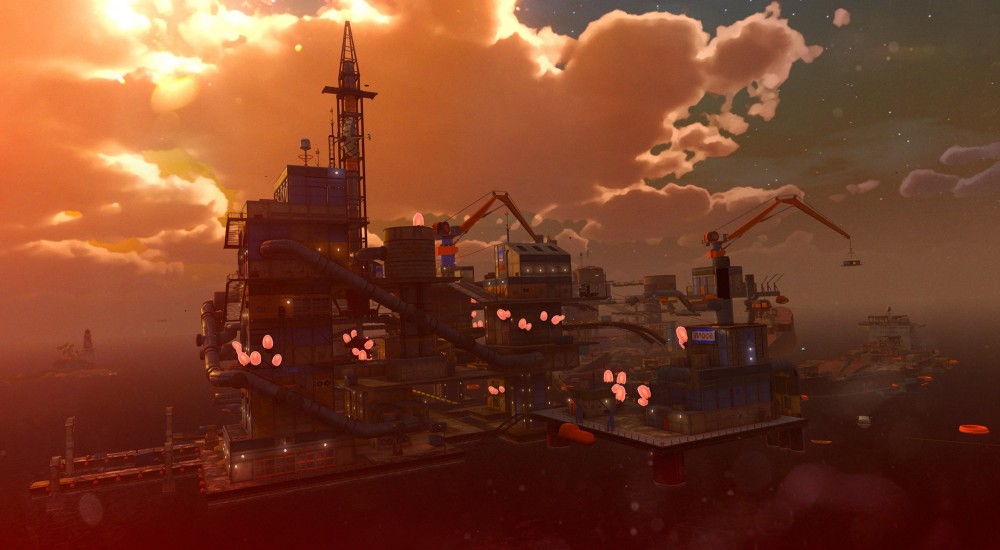 The Sunset Overdrive DLC releases began just a couple weeks ago, starting with "Mystery of the Mooil Rig".  To show players what they're getting into, Insomniac Games has released a new dev diary focusing on the two new Mooil-themed weapons.

It's looking like the new weapons focus specifically on crowd control and AOE to give the player a fighting chance when they find themselves surrounded by baddies.  The Rivet Blaster looks especially handy for those of you who want to plan your assaults ahead of time for maximum Style.  I can't imagine how devastating these weapons are in the 8 player co-op mode, Chaos Squad, but I'm willing to bet it involves a lot of screaming.

And who are the poor folks who get to experience your newfound arsenal?  Innocent rig workers, of course!  In "Mystery of the Mooil Rig", the players find themselves answering the distress signal of an offshore Mooil Rig just outside of Sunset City, and soon become embroiled in a turf war between two factions of rig workers who are fighting over...whatever it is really riles up rig workers.  Overall colors?  Chest hair competitions?  Who knows.

As is the norm for modern AAA releases, this DLC is part of a purchasable Season Pass for players who are willing to assume the game will still hold their interest a few months after its release.  If such an assumption makes you want to hurl a David Bowie record at a bulky orange dude, then you can head on over to the Xbox One store and pick up the Season Pass for a cool $19.99, which nets you "Mystery of the Mooil Rig" along with a still-to-come campaign DLC, the "Weapon Pack" DLC, and a few unique outfits and amps for immediate use.  Maybe one of the outfits will have a t-shirt proclaiming the faults of Earth's reliance on non-renewable energy sources!  That'd really piss off those rig workers.