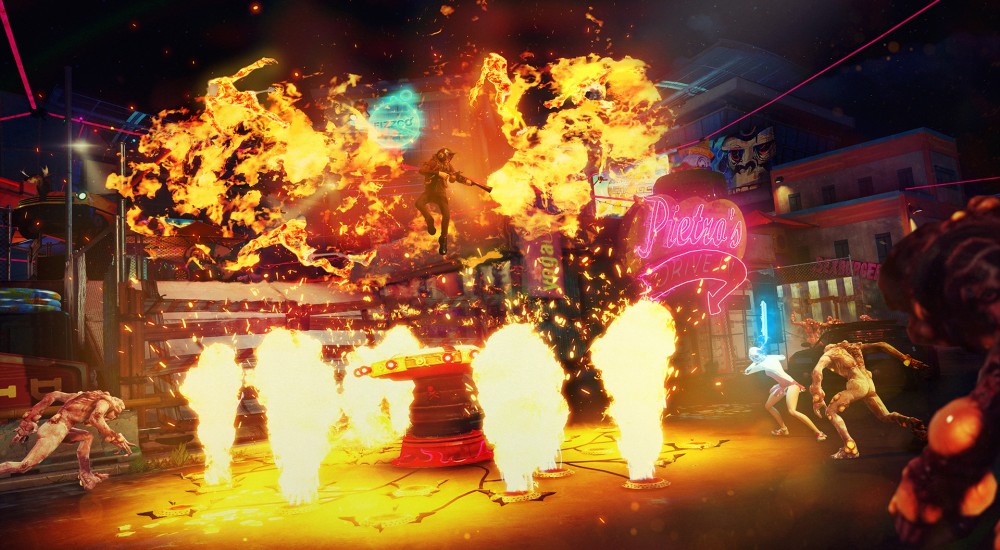 Co-op in Sunset Overdrive looks chaotic. Which is great since that's the name of the game. Chaos Squad is an eight-player co-op mode where you'll work together to take down armies of energy drink infected mutants.

After hopping in a photo booth in single player mode, you'll join up with up to seven friends online with the same customized character you've been using for solo play. The eight of you vote on mission types then dive to win rewards like cash, customization items, and weapons that are also transferable to the single player campaign.

After several rounds of annihilation, you'll enter the final battle, Night Defense. In Night Defense you are tasked with protecting barrels of Overcharge, the infectious energy drink in the game that drive people (now mutants) wild. It's similar to tower defense, you'll place traps along the path that the mutants take, but can also deal damage yourself.

Your Night Defense match will be easier or more challenging depending on what missions you select during your co-op campaign. There's a bunch of mission types that you'll encounter, but Insomniac introduced us to two specific ones recently. One has a player rebooting wi-fi on a tower while the others back him or her up. A second has players chasing and planting explosives on a Fizzco blimp as it flies around the map. It's also been confirmed that servers in Sunset Overdrive will be dedicated, so non of that peer-to-peer nonsense.