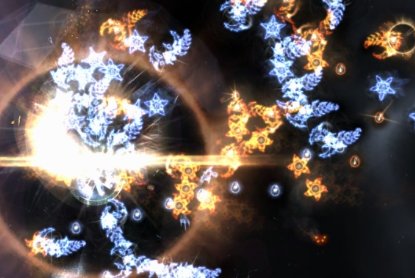 From day one, Schizoid promised true teamwork where players have to rely on a friend to survive and advance through the game. The clip is short, but we get to see how the game actually works and why it's so "teamworky". In a nutshell, Schizoid is based on red and blue crabs that need killing, but there is no shooting in the game. Instead, you kill these evil crabs by running into them with the blue player ramming blue crabs while the red player rams the red crabs. But the catch is that the blue player can't touch the red crabs or they die and vice versa making the co-op element oh so apparent.

The game has been built from the ground up on Microsoft's XNA platform, so you can expect some news about Schizoid to come out of GDC starting February 18th.  In fact...I wouldn't be surprised if that was the release date.