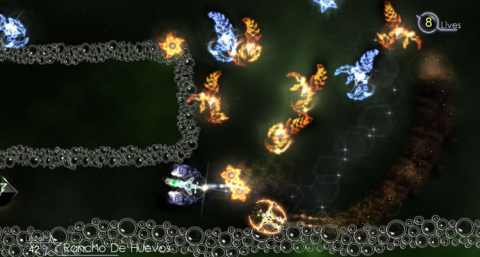 The personality disorder Schizoid has a lot to do with being anti-social.  It's sort of ironic then, that the game that claims to be the most co-op game ever is titled Schizoid, that is, to have such a strong focus on working together.  The basic premise of Schizoid is simple.  You have two ships, one red and one blue, and each ship can attack enemies of the same color.  Attacking in Schizoid simply means "running into" and it's something that takes some getting used to in an age dominated by arcade style shooters like Geometry Wars.  In fact, Schizoid is so simple the only part of the controller you use is the left analog stick.  Part of the game's beauty is in it's simplicity, as there is this sort of dance that the game becomes between players and enemies that aren't crowded by bullets. The game does a great job of introducing you to different concepts and enemy types as you progress through the campaign of more than 120 levels.  If you beat a level without dieing you'll get a gold medal which allows you to skip this level later on, and every 10 levels you'll find a checkpoint where you can restart or come back to later skipping all gold levels in that group.  It's a system that works well, especially in a game that you'll find yourself dieing quite a bit. So all of this is well and good, but what about Schizoid's co-op?  What makes it the most co-op game ever?  Well besides the obvious fact that there is no mode with a single ship, there's the simple task of constantly communicating to cover each other.  One touch from an enemy of the opposite color and it's light out (or on...these explosions are bright) for you.  Even the powerups like the bomb or razor wire can only be activated if both ships touch each other.  With both players sharing from the same life pool it's imperative to keep each other alive.  Eventually as you play with someone more and more you begin to see what the developers intended in the game's intelligent level design.  We definitley found it enjoyable, but I'll admit, it's probably not for everyone. So while Schizoid, the disorder, might imply a tendency to solitary lifestyle; the game Schizoid forces just the opposite.  Perhaps one can help cure the other?

The Co-Op Experience: Schizoid is a co-op action game in which teamwork matters like never before, as gamers and their friend or AI ally protect each other from barrages of glowing enemies. Co-op gameplay to the max: No other multiplayer co-op game has such tight cooperative gameplay. The two players (or one player with a computer A.I. partner, or one player controlling both ships in Uberschizoid) must work together closely in order to defeat the hordes on each level.