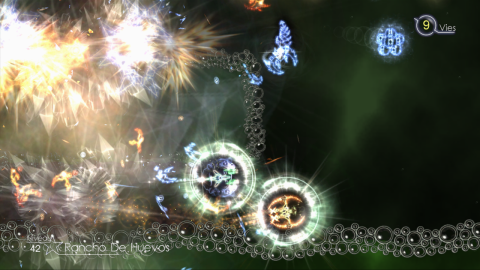 We had a little chat with the game's Technical Director and Lead Programmer Jamie Fristrom from Torpex Games to find out just what makes Schizoid a co-op fans dream.

Co-Optimus: Where did the name Schizoid come from?

Jamie Fristrom:  Back when the name popped into my head the only mode was the one where one guy controls two ships - and so it needed a crazy name to go with the crazy gameplay, and *Multiple Personality Disorder* and *Corpus Callosotomy" were too long.  (Yes, we know Schizoid doesn't mean multiple personality disorder, but it sounded right.)  It was a couple days later that we realized the game really shined as co-op, but we stuck with the original name.  After all, there's still that big "schism" in the game, between red and blue, fire and ice, yin and yang - ok...now I'm pretentious.  It just sounds cool.

Jamie:  The original Gauntlet was definitely an influence - the way two players could work together to exploit the enemy AI in that game was something we consciously brought over.  Pac-Man, also - in a way, Schizoid is free-floating analog Pac-Man...where the dots can kill you.


Co-Optimus:  How long has the game been in development? it seems like forever ago since we saw it's announcement with XNA.

Jamie:  Tell me about it!  I wrote the first line of code on September 5th, 2006 - I remember because it was my birthday.  What can I say?  It took a lot longer than we expected.  We're perfectionists. 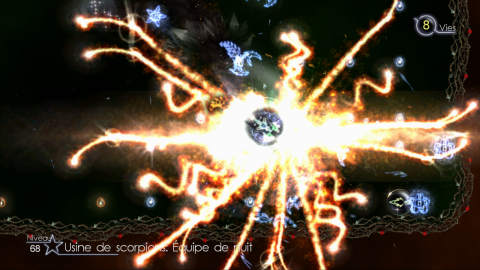 Co-Optimus:  The basic concept of the game seems similar to that of Ikaruga.   Any inspiration there?

Jamie:  Lots of people seem to mention Ikaruga when they see Schizoid, but none of us had actually played Ikaruga.  I still haven't been able to play it - it's like something out there is keeping me from playing it.  For mysterious reasons I can't access games on Microsoft’s internal PartnerNet network with my particular devkits, and my consumer box crashes when I try to run the trial.  When we finally played it, I guess we were relieved to see that although it did have an opposing-color mechanic similar to ours, it was otherwise a very different type of game.

Jamie:  I suppose some may think at first glance that Schizoid lacks substance because the only control is the analog stick, but it has surprising depth.  Like Pac-Man, where all you can do is move, or Go, where all you can do is place a stone somewhere on the board, endless possibilities emerge from a simple core:  for example, you can lure enemies to you, only to retreat behind your wingman at the last second, so your wingman can take them out;  your wingman can stand behind a wall, effectively pinning enemies there, while you sweep around and scoop them up;  you can block bullets while your wingman goes in to kill the gun, and so on.

There are strategic tradeoffs as well - for example, do I stay with my wingman for protection, or do we split up to do recon or to kill "breeders", enemies that lay eggs which will make more enemies?

And on top of that delicious cake, we have power-up frosting.  Our favorite is the razorwire, which is this glowing net that stretches between you and your wingman - when it's active, you loop around enemies and they get destroyed on the wire.

Jamie:  If we're not just talking videogames, then it's Dungeons & Dragons.  The way you and your friends work together, up-close fighters supported by archers and backstabbers and healers and spellcasters throwing buffs and area-of-affect blasts, it's a wonderful tactical formula.  If we're talking just videogames, other than Schizoid, my best co-op memory was playing the very first Rainbow Six on the LAN at work.  That game was *hard* - one of us would screw up and the terrorists would kill the hostages and we'd all come out of our offices and yell at each other, come up with a new plan, and then go right back at it.  So there's another influence on *Schizoid* - it gets hard in the later levels, and you and your partner have to work together to figure out good plans for how to beat the levels...and there's often some good natured trash-talk going on as well.


Co-Optimus:  Why do you think more games need to have cooperative modes?

Jamie:  It seems obvious, but...most videogames are solitaire - which is great, they're a wonderful way to kill time, I've played thousands of them, but in the end you're just playing with yourself, right?  But when you play with others most of what's out there is competitive games.  Which sucks;  that's not a great way to be social, to find a friend or a stranger and either try to humiliate them or be humiliated by them.  So, it sounds touchy-feely, but co-op is just a great way to bring people together.  Hell, that's how I keep in touch with my brother on the east coast - we play co-op games together.  We started doing it with Diablo 2 and we're still doing it with games like Gears and R6LV and now Schizoid.


Co-Optimus:  Thanks for your time, and thanks again for reading the site!

Jamie:  Thanks so much for letting me rant!  It's good to see there are people out there who care about co-op as much as we do.